Circle of Jerks 3: Jer on Dunn

BoC: The Circle of Strife.

Share All sharing options for: Circle of Jerks 3: Jer on Dunn

Meg had the idea to do another one of these dumb articles where the three of us BoC writers just grasp for content, and I've once again got stuck asking Dunn some stupid questions.

Here's what happened when I pulled Dunn away from huffing paint and playing Mario Kart for 5 minutes...

Dunn: Jonathan Quick has run hot and cold all season, though I wouldn't say the majority of the Kings' losses fall on him. Were there a few? Yeah. But goalies blow games all time, like Niemi against the Canucks in the playoffs. No, the biggest disappointment has to be Lombardi and Sutter. Trading Loktionov was bone-headed, possibly committing to Regehr for multiple seasons isn't smart either I feel, and sitting Alec Martinez instead of Keaton Ellerby is just painful. Sutter's desire to all of a sudden use the fourth line to keep momentum going after a missed power play just further bogs the team down also. I expected better. Kind of like when your girlfriend says she has a surprise for you, and you get all geared up for anything, but it turns out to only be a picture of the two of you framed. That shit is disappointing.

The best surprise has been Jake Muzzin, obviously.

Q2: What would you name the members of your party if you were playing The Oregon Trail right now?

Dunn: I have always named my party members the same names since I was nine: Poo, Ass, Boobs, and Wiener. I always named myself after my childhood hero, Skeeter, from Doug. Ironically, that name turned out the be the most immature years later.

Q3: If every player on the Ducks' current roster were for some reason hitting unrestricted free agency this offseason, which player(s) would you want LA to aggressively pursue, and why? You have to choose at least one, asshole.

Dunn: The Kings don't have a ton of cap space once they re-sign their RFAs, and even less if they re-sign Scuderi, Regehr, or if Willie Mitchell doesn't go on LTIR. So if I had to look at this from a tight financial situation, I'd say Emerson Etem because it would probably piss off the Ducks and he's inexpensive. Without the financial restraints the choice is easily Corey Perry, just so Anaheim could really see what an annoying piece of shit that guy is. Maybe Selanne if he doesn't retire, so everyone could witness the ultimate in blasphemy. 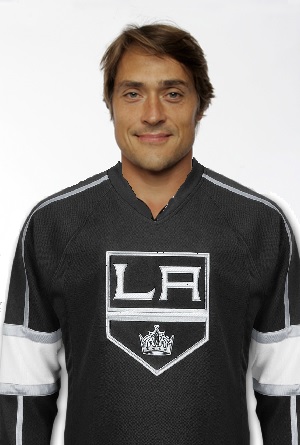 OH MY GOD, YOU FUCKING MONSTER.

This interview is over.