The Sharks are probably going to make the playoffs. But how did they get here?

Unless something goes disastrously wrong over the final seven games of the season, the San Jose Sharks are going to be in the playoffs. Their odds are greater than 90 percent, and while it isn't outside the realm of possibility that they will finish as high as 4th in the West (winning both of the remaining games against the Kings would help a lot with this) it's more likely that they will finish 5th, 6th, or 7th.

This finish for the Sharks - a bottom-four playoff team - isn't a surprise. After all, they were 7th last season and didn't do much in the off-season to change their roster. A reasonable, impartial person (if such a thing existed) asked to make a prediction prior to this season would have in all likelihood pegged the Sharks for a record very similar to the one they have produced. So, in a sense, there hasn't really been anything too surprising about this season.

But it sure FELT like a crazy ride, didn't it?

The Sharks have ridden a roller-coaster of a season right into the place most expected them to end up. It's like a movie with the opposite of a twist ending - the plot of the past few months for the Sharks involved so many twists and turns and ups and downs that how it looks to end is surprising only in its utter expectedness.

To remind ourselves how the Sharks got here, let's take a look at their season-long playoff odds, via Sports Club Stats. Along the way I've added notes about notable victories, defeats, and transactions for the Sharks.

Click to view the image larger and not blurry. 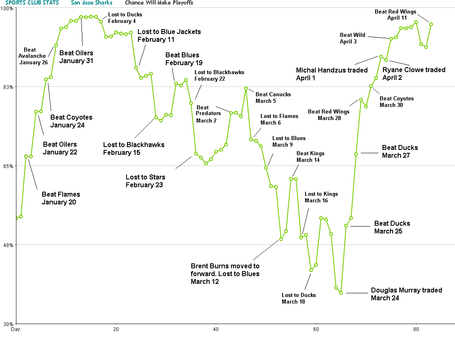 So, how can we explain the dramatic ups and downs?

Was the winning streak to start the season actually impressive? Looking back now, the teams the Sharks beat are, for the most part, non-playoff clubs.

Was Douglas Murray the anchor weighing the team down? If so, then how did they win so much with him in the lineup at the start of the season?

Did moving Brent Burns to forward make a big difference? If it did, why did the Sharks continue to lose for almost two weeks after making the change?

The Sharks ended up exactly where we expected them to, but took the most entertaining route possible to get there. In the end, they put together a fun season for me to write about - and I don't really care that much about anything else.

My 7th-favorite book is Kurt Vonnegut's Cat's Cradle. It's my favorite of his novels, but if you don't agree that's okay. We shouldn't fight about this stuff.

Tonight the Sharks play the Phoenix Coyotes. A win would move the Sharks up above a 95% chance to make the playoffs, and bump the Coyotes down to around 5%.

That sounds pretty good to me. Let's do that.

Prediction: Brent Burns switches to a new brand of skates and scores five goals. Narratives are built from this. Sharks win 5-1.