Five reasons why Deadmau5 is better than Skrillex (also the Sharks play the Kings).

"I love Skrillex. He's the greatest musician of the past 100 years, and I wish I was a woman so I could have his babies." -Dunn (probably)

Deadmau5 is the best.

I could end the discussion right there, having already won the argument by taking the correct side. But because I know SOME PEOPLE have trouble accepting obvious truths even when they're stated so plainly, I'll provide just a few of the thousands of reasons why Deadmau5 is better than Skrillex.

#1: His music is more technically impressive.

#2: His songs are actually nice to listen to:

#3: One time as a prank Deadmau5 wore Skrillex's real phone number on a t-shirt to the Grammys. 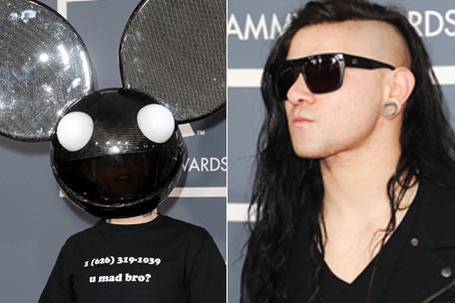 Who would have thought that the guy who wears a giant mouse head would be the less ridiculous-looking of the two?

There are six games left in the season for the San Jose Sharks, and there is only one team remaining that they face more than once: the Los Angeles Kings of Los Angeles. Every point matters now, and the Sharks are going to have to earn their place in the playoffs as they play a third of their final games against the best team in the NHL.

The Sharks are in a bit of a tricky situation regarding playoff seeding, since looking at the advanced stats suggests the Kings would be the number one team San Jose would want to avoid in the first round. Chicago would also be a major problem, while a team like the Canucks or, in a perfect world, the Ducks would make for an easier road into the second round for the Sharks. Barring some very unlikely scenarios, the Sharks can't possibly face the Kings in the playoffs unless they finish fourth or fifth in the West, which is what they will probably earn with a solid finish to the season.

The Sharks certainly can't afford to intentionally lose games to drop out of 5th place - after all, it would be all too easy at this point to drop out of the playoffs entirely! But, as we look ahead at the final two weeks of the regular season, the Sharks might battle their way right into the toughest first-round opponent they could possibly face.

Beating the Kings twice in these final six games would just about guarantee a playoff spot for the Sharks - and would set a great tone for a possible playoff series between the two teams.

Prediction: The Sharks come out energized and ready to win thanks to Patrick Marleau playing some Deadmau5 in the dressing room before the game. Sharks win 3-2.

"The truth will set you free. But not until it is finished with you."

My 6th-favorite book is Infinite Jest, by David Foster Wallace. We discussed it a bit in the comments here. It's a fantastic, monumental book that rewards the effort that reading it requires.

Deadmau5 is the David Foster Wallace of music.