A force for good? Or for douche baggery?

The Columbus Blue Jackets are winning. It goes beyond all reason. After starting the season 5-16 the Blue Jackets are now sitting in 8th place barely edging out the Detroit Red Wings. I cannot overstate how incredibly awesome this would be if Columbus sneaked into the playoffs and Detroit missed (and that is hardly news). But here is the quandary we are presented with: The Kings have to play Lumbus, and Los Angeles isn't assured a playoff spot yet. Obviously the Jackets are the feel good story of the year if they make the playoffs. The Kings, well, are the trolls of the NHL. And it's a fact we are proud of.

Now San Jose and Anaheim have missed their chances to play spoiler to the Columbus fun times (no definition for that yet). The Kings are dicks. Vancouver's year finally with a superior roster? Nope. St. Louis is finally ready to break the drought? Swept. Phoenix is relevant? Fuck that. Ilya Kovalchuk has a chance to lift the Cup finally? Hahahaha. 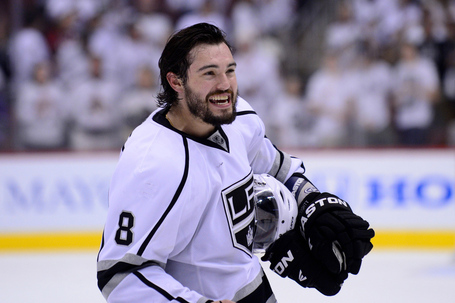 Columbus desperately needs a win. The Kings would like one. L.A. hasn't looked particularly sharp lately and still has picked up a decent amount of points. They stand a pretty good chance to make the playoffs. I could give a shit who they actually get paired up with, as long as it's not San Jose or Anaheim because my blood pressure/liver can't take it. This is the last chance to fuck up Detroit before they leave the West. But it's also a chance to shit all over Columbus and the miracle season. 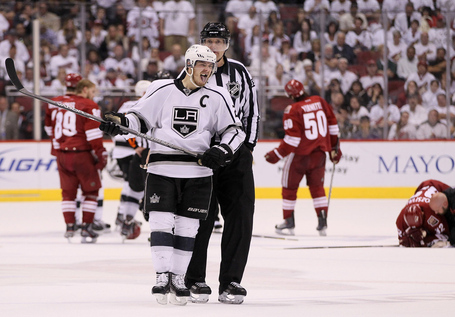 Holy shit, that ref is huge

I'm not saying the Kings should throw the game. And ideally this game goes to overtime anyways just so that the Blue Jackets still get a point. But does it really matter? Does Columbus stand a chance to finally get a playoff win for the first time in their franchise history while getting paired up against Chicago potentially? No, they need to be paired up against the Ducks. The Kings need a big game, they could use the momentum...but this may be bigger than just us. This is a chance for a team of misfits and castoffs to somehow make the post-season. A team that saw so much managerial turnover, you figured it was ran like a Denny's in Barstow. But here they are. A team with a discarded goalie who was supposed to be in over his head. With a disgruntled star veteran who was supposed to be on the decline. A team full of possibly decent players but who got stuck playing with Jack Johnson. This is not a winning formula. But they have hope. To not only make the playoffs for only the second time in their existence, but to knock out their division rivals in "HOCKEYTOWN". And to, above all else, piss off J.J. royally. Just think about it guys. 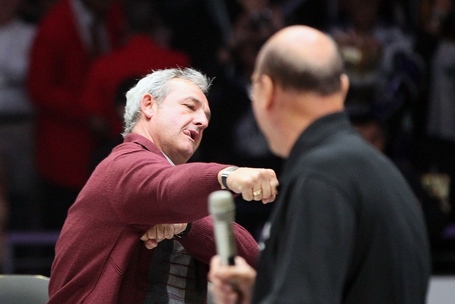 Nah, to hell with that. Sorry Columbus.

Prediction: 5-1 win as the Kings finally get it going and Sergei Bobrovsky gets chased.