I do a pretty bad job designing a couple of jerseys for Cthulhu-based hockey teams.

The world is indeed comic, but the joke is on mankind.

My second-favorite book isn't really a single book. It's the collected fiction of H.P. Lovecraft, creator of Cthulhu, Yog-Sothoth, The Black Goat of the Woods with a Thousand Young, Nyralathotep, and many other weird and wonderful works of utter madness.

We previously discussed Lovecraft stuff back in December, when Gary Bettman and Donald Fehr teamed up to fight my cat Chandler. While Lovecraft created the shared "Cthulhu Mythos" fictional universe, other writers have expanded upon it over the decades since his death, and now there are probably thousands of stories dealing with the same tropes and themes. Lovecraft is the best, though, and though not all of his stories are great and he can be hard for new readers to get into, fans of modern horror and science fiction should give him a try just to see where so many modern authors and filmmakers get their ideas.

All of Lovecraft's famous stories are available to read for free online here. My favorites are The Call of Cthulhu, The Dunwich Horror, and The Rats in the Walls. If you've tried to get into Lovecraft before and have had trouble, then I recommend checking out the great H.P. Lovecraft Literary Podcast, which goes through every single one of his stories and summarizes and discusses them. It can really help to make his writing more accessible.

To bring together Lovecraft and hockey, I decided to try my hand at designing some Cthulhu Mythos-inspired hockey jerseys. It's something that Geeky Dave hasn't done yet, but I'm sure that when he gets around to it he will do a much better job than me. I am not actually a graphic designer or a visual artist, though I know that confession may come as a shock to you, based on my previous work. I think I did a pretty good job when I designed a new jersey for the Ducks though, so maybe I really do have a talent for this stuff.

I made the jerseys using this template from the "Rebranding the NHL" guy. Here's #1: 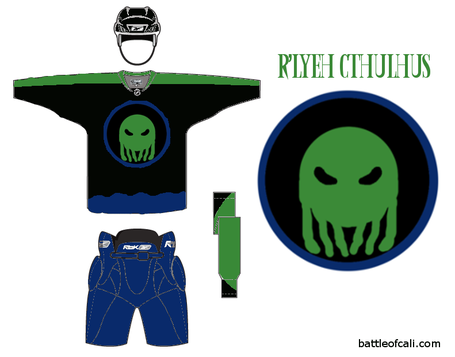 Green was an obvious choice for team colors, and black needed to be in there as well because it's scary. The dark blue and the wavy lines along the bottom (inspired by the Islanders' fisherman jersey) evokes the waters of the Pacific where Cthulhu sleeps.

I tried a different version where the jersey had green tentacles along the sleeves but it just didn't end up looking right at all, so in the end I settled on this Stars/Canucks combo that I'm pretty pleased with.

For my second design I went with a creation that isn't actually from Lovecraft himself, but heavily inspired him and became part of the Cthulhu Mythos world. This jersey is based on "The King in Yellow," by Robert W. Chambers. 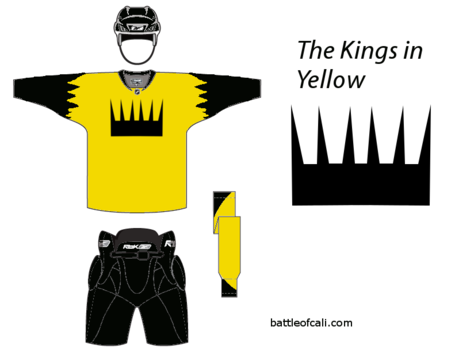 The colors and logo were pretty obvious here, given the title of the book and how stupid pretty much every other color except for black looks when paired with yellow. There's a reason the Bruins and Penguins have some of the best jerseys in the league, while the Predators' jerseys look like silly garbage.

One thing I really like about this one is that it looks suitably evil and intimidating while still totally looking like Charlie Brown's shirt.

I wanted to do some more of these, but I got distracted after I was accused of libel, so two will have to be enough for now. If you want to take the blank template and design your own versions of these teams or one of the other Cthulhu Mythos deities, I heartily endorse the idea.

You probably won't do a worse job than me.

"Jobing.com" has got to be the worst arena name in the entire NHL, right? Man, it's so horrible. So awkward, so weird, so unpleasant to the ears. "Jobing" also sounds like a shameful action of some kind, doesn't it?

It's pretty awful. Just like the team that plays there.

No playoffs for you, Coyotes.