Let's learn a bit about the newest Sharks. 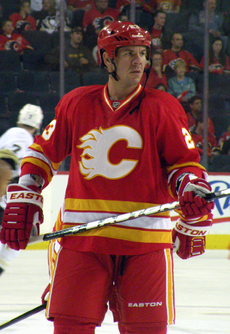 Scott Hannan was on the Flames? Really?

Hannan was selected in the first round of the 1997 NHL Entry Draft, 23rd overall, by the San Jose Sharks from the Kelowna Rockets of the WHL.

The Sharks now have three players from the first round of that draft. Two of them are good.

On April 3, 2013, Hanna was traded to the San Jose Sharks in exchange for a conditional 7th round pick in the 2013 Draft

At some point in his career Hannan dropped the final "n" from his name.

Hannah was in the All-Star game? Wow I totally forgot that.

Okay well that's all the trading the Sharks did so - 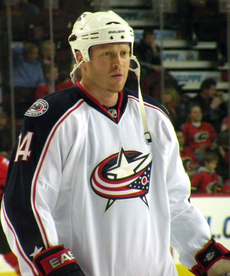 He was drafted by the New York Islanders fifth overall in the 2000 NHL Entry Draft.

Ahahahaha what? He WAS?

He received the third-longest suspension in the history of the NHL for his hit to the head of Marian Hossa in Game 3 of the 2012 Western Conference Quarterfinals.[3] Prior to his hit on Hossa, Torres had previously been suspended or fined several times for similar hits to opponents' heads.

Later in the season, Torres was suspended four games for a hit to the head of Edmonton Oilers forward Jordan Eberle during a game on April 6, 2011. Canucks general manager Mike Gillis told media that he "strongly disagree[d] with it", while Torres argued that he did not stick out his elbow or leave his feet to make the hit and that Eberle raised his hand in defence of the oncoming check, indicating that it was not a blindside hit. Eberle was not injured on the play.[32] The suspension ended Torres' regular season as the Canucks had two games remaining. He finished with 14 goals and 29 points in 80 games. Returning for Game 3 of the opening playoff round against the Chicago Blackhawks, Torres received further scrutiny around the league for a hit on defenceman Brent Seabrook. Although he received a minor penalty on the play, Torres did not receive further suspension from the league.[33] Later in the game, Torres hit Seabrook a second time, taking the defenceman out of the next two games. Vancouver went on to win the series in seven games, before defeating the Nashville Predators and San Jose Sharks en route to the 2011 Stanley Cup Finals. In the opening game of the fourth round, Torres scored the game-winner against the Boston Bruins with 19 seconds remaining in regulation.[34] The Canucks eventually lost the series in seven games.

On July 1, 2011, Torres signed a two-year contract worth $3.5 million with the Phoenix Coyotes.[35] He recorded his first goal nearly a month into the 2011–12 season, in a 3–2 shootout loss to the Dallas Stars on October 25, 2011.[36] Torres continued to build a reputation for targeting opponents' heads.[37] He was fined $2,500 for striking Jan Hejda in the head with his forearm in a December 29, 2011, game against the Colorado Avalanche. Two nights later, he struck Minnesota's Nate Prosser in the head after jumping into a hit, earning a two-game suspension.[38]

Uh oh, this section isn't going to be good.

In an April 17, 2012, game during Phoenix's first round playoff series against Chicago, Torres jumped into a hit that contacted Marian Hossa's head. Hossa was taken from the ice on a stretcher and sent to hospital by ambulance.[39] While Torres was not penalized on the play, the NHL characterized the hit as violating league rules on interference, charging and illegal contact to the head. Citing his previous history, league disciplinarian Brendan Shanahan suspended Torres for 25 games for the hit—tied for the second-longest suspension for an on-ice incident in modern NHL history—sidelining Torres for the rest of the playoffs.[40] The league reduced Torres' suspension to 21 games on appeal over the summer. Having already served 13 games during the Stanley Cup Playoffs, the reduction meant Torres would miss the first 8 games of the 2012–13 NHL season, which he completed on 1 February 2013.[41]

Raffi Torres is "tough to play against."

On Halloween 2011, Raffi Torres' costume prompted criticism as he and his wife donned blackface dressed up as rapper Jay-Z[47] and Gianna as Beyoncé, which may be considered racist. However, others have said that his intention was harmless, as he is described as a big fan of Jay-Z, and was intending the costume as a tribute.[48][49]

*throws hands in the air and storms out of the blog*