Share All sharing options for: Los Angeles Kings Gameday: The Morning After

Trade deadlines are a lot like a drunken night out. It starts out enjoyable, becomes overly stimulating to the senses, and occasionally results in some really bad decisions. You wake up the next day, roll over and see the Ben Bishop next to you and think, "Fuck, this was a mistake". That and everyone feels worse for wear, but, hey, "it was fun".

Yesterday proved to be far more eventful than I had thought. Marian Gaborik was traded to Columbus who needed a big scorer in the absence of Rick Nash, which was just all sorts of irony. Then there was the even more ironic trade of Steve Mason going to Philadelphia after losing his starting gig to a goalie that was traded by...Philadelphia. Lastly, there was San Jose who just lost their detestable piece of shit, Ryane Clowe. One day later, the Sharks had brought in an even more detested piece of shit, Raffi(e) Torres(e). It was a pretty comical trade deadline, all things considered. Except that Raffi Torres deal. Fuck that guy. Clowe scored (twice!), and Columbus is laughing at the Rangers and Flyers. The hockey gods can be real sadistic jerks I guess.

Speaking of which, the Kings get to face Torres a couple more times this season now after finishing their season series with Phoenix a few nights back, much to the chagrin of, well, me. Additionally, the Kings made no move for another forward, while Minnesota, who the Kings play tonight of course, added Jason Pominville. They also paid a pretty hefty cost for Pominville, so I'm not exactly screaming the Kings should have landed him. With Dustin Penner set to miss some time with a possible waffle related injury, and Tyler Toffoli apparently unable to play on the left side of a hockey rink, the Kings might have been in the market for a winger. Of course the obvious solution would be to throw Jordan Nolan or Brad Richardson onto the left for the fourth line, and just bump Kyle Clifford and Dwight King up, that's no fun. No, I say the Kings should dip into the minors and recall some more help. There's already a big bodied winger with NHL experience sitting in the minors. I speak of course of my muse for poetry, Anthony Stewart.

Sure Anthony Stewart may not be tearing up the AHL with only 7 points in 26 games, but the Kings are going about it all wrong. Look at Dustin Brown on the right wing. Rather mediocre. Move him to the off wing, and, well would you look at that, a Stanley Cup winner. Problem solved. Poetry time!

You brought the heft,

When we moved you left.

You will be our saving grace,

The greatest of the recalls?

It's a work in progress.

In other shitty side effects of the NHL trade deadline, I took to twitter to defend my prized chica, Alec Martinez. I may have said Martinez was a tradeable asset, but "absolute garabge"? NO SIR. An angry hookah smoking Raiders fan was very upset with Martinez (who also rudely jumped into a conversation that he wasn't a part of. THE NERVE), so I tried arguing otherwise. Because that's what we do here at BoC: Argue with people, and make fun of them later. While I could get into the whole advanced stats debate, I won't because that's Jewels from the Crown's thing, and I am more of the "fuck you, I'm right" blogger. Unfortunately on twitter I tried being logical because he was a fellow (and new) Kings fan, and it produced a boring as fuck dialogue that isn't worth posting. In short, I blamed Keaton Ellerby, who everyone looks like crap with. I was told I was wrong, and he turned into a sarcastic dick, pointing out that Martinez doesn't score and is now useless. Hate to see what that means for Drew Doughty. There was also a statement that Martinez was the worst defenseman in the playoffs last year, though that kind of ignores Peter Harrold I think. That's why I should never be polite or rational, so that way I can be a sarcastic asshole first. Anyways, I think Martinez needs Matt Greene, and in fact may be the only person in the world who has that problem. Which is why I am less worried about Robyn Regehr now, who happens to be an older and slower Matt Greene.

Really, Regehr should be an average replacement for Matt Greene, and that should help Martinez, which should stabilize the third pairing defense. As long as the Kings don't try and have Regehr replace Willie Mitchell whose career may be over since his knees are falling apart. This is a quintessential rental scenario, especially with a shrinking salary cap, so it's just until Matt Greene is 100% and...Oh crap. OH CRAP.

Yep, possibly the end of the line for Mitchell. Key word is "possibly". This would be a pretty nasty blow to the Kings, but frankly is a boon to the growing "I Want Willie Mitchell to be my Dad" campaign with all the new spare time he potentially could have. 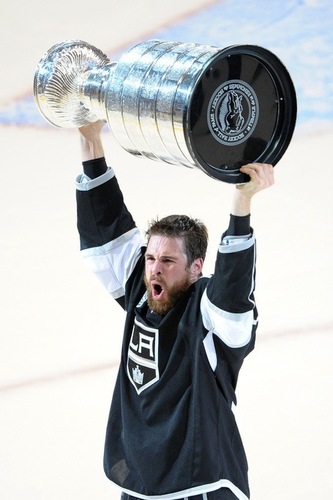 And if Darryl Sutter is remotely rational he will, for the love of all that is holy, not break up the Drew Doughty/Jake Muzzin pairing.

The last time the Wild and Kings met the Kings lost in a shootout, prompting Jonathan Quick to freak the fuck out. Now the Wild have Pominville, who probably isn't playing, but they are looking more like a top 5 team in the west with that addition. Meanwhile the Kings didn't really do too much. Not necessarily a bad thing, but competition got a hell of a lot tighter in a conference where it's already tighter than [CONTENT REMOVED].

Prediction: Regehr makes me eat my words and destroys all challengers. Kings win 2-0 with goals from Brown and Kopitar (who I think are due).