With eleven games left, where to the Sharks rank in the various team stats?

There are eleven games left for San Jose this year. It's been a weird season for the Sharks, best summed up with the following chart: 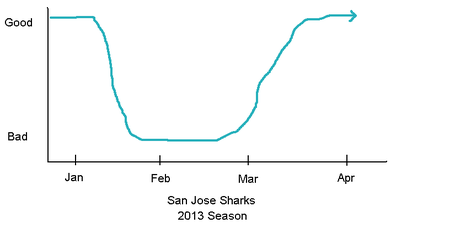 The Sharks got off to a great start, points-wise, to open this season, though a lot of luck obscured some really mediocre play during that stretch. Then the results on the ice started to reflect the underlying problems with their play - and then the results got even WORSE, as the bottom dropped out for the team and nearly the entire month of February was wasted.

But now, with less than a quarter of the season remaining, everything seems to be clicking for San Jose. Scoring has picked up, Niemi has regained his form from earlier in the year, and the once-dismal powerplay is trending upwards.

The Sharks have a 93% chance of making the playoffs as things stand right now (actually Friday afternoon). After a season of ups and downs, how do the stats look for the Sharks? Let's take a look at where San Jose ranks in various important (and some unimportant) statistical categories.

Several of those wins came in the shootout, but this is sill a respectable ranking for San Jose.

Very very bad. This is reflective of the Sharks' scoring woes throughout their doldrums in February and early March.

Goals against per Game: 5th

Excellent. Antti Niemi is the man.

Nice. Not as great as it has been in previous seasons, but much better than it was earlier in the year.

Hooray! We love you, Larry Robinson! You are our savior!

Very nice. The Sharks have been near the top of this stat every season Todd McLellan has been the coach, and that doesn't look like it's going to change.

Shots against per game: 17th

Boooo. San Jose sure gives up a lot of shots, considering how great their GAA is. Once again, Niemi rules.

Here we are - the most important (in terms of being the best at predicting how well a team will perform in the future) of all these stats. The Sharks sit at 10th in the league here, better than some teams (the Penguins and the Ducks, for example) but worse than several other clubs the Sharks are likely to face in a Western conference playoff run (the Blackhawks, the Blues, the Canucks, and the Kings).

Sitting at 10th in the league in Fenwick Close can either be a cause of optimism or pessimism, depending on your attitude. On the positive side it suggests that the Sharks are one of the teams that does things right more often that not, and puts them above the .500 Fenwick Close rating (which correlates very strongly with success).

On the negative side of things, 10th is not very good. Judging by Fenwick Close, the smart money would be on the Blackhawks or the Kings to win in a seven-game series against the Sharks. The stats seem to suggest the most likely finish for the Sharks is another playoff exit in the first couple of rounds.

But today's book is Good Omens, so I'm going to be optimistic.

Good work, Sharks. Keep it up. You're doing great!

Texas? Only steers and horrible hockey teams come from Teaxs, and the Dallas Stars don't look much like steers to me.

Prediction: According to Fenwick, the Stars are about to get thrown down a flight of stairs.