The point I am trying to make is that Ken Hitchcock is old and losing it, while I am young and not nearly as close to (natural) death.

Ol' H-Cock brought up a while back that the rink at STAPLES Center is "way smaller" blah blah blah "corners are rounder" blah blah blah "my grand-kids never visit me". It was in response when discussing the Blues fun collapse in Los Angeles during the regular season, right before game three. Of course then the Blues would lose the next two in L.A. getting shutout, then coughing up the lead in the third period on the Kings' smaller ice again. Now St. Louis has lost three straight and need to win to keep their Jew-hating selves around for a while longer. And here they are playing on the tiny puddle at STAPLES. Here's some other things H-Cock thinks are against he and his team: 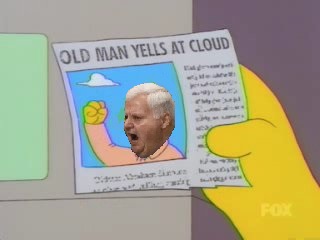 The Kings stole that last game in what was a travesty in the making since games one and two. They had come close in those past two, but actually pulled it off this time. Also, Blues fans are surprisingly okay with me repeatedly saying they hate Jewish people and are like Hitler. I give up. They must just hate Latinos.

Prediction: There is no prediction. Fuck you.