I have some things I'd like to say about the City of Angels.

Los Angeles is the worst city in California, the United States, and probably the world.

I mean I've never been to Bangui in the Central African Republic but I imagine it at least has better public transportation than Los Angeles.

LA sucks. It's an awful, vile place where the worst instincts of the human species are rewarded and encouraged. People with hopes and dreams from around the globe go to Los Angeles and are torn apart and re-molded into hyper-superficial, ultra-competitive, vacuous, sycophantic, sociopathic monsters.

By draining the rest of the world of so many creative and artistic people and then forcing those people to forget their talents and instead appear on hideous reality television shows, LA isn't just a horrible place on its own - it actually makes the rest of the world worse. Combine the creativity-drain of the city with its car-centric layout, massive traffic jams, and blistering heat that requires everyone to run their air conditioning until the power grid coughs and dies, and you have a place that drains the soul and the blood from the planet and the human race.

And what does the city of Los Angeles offer in return? G.I. Joe movies. 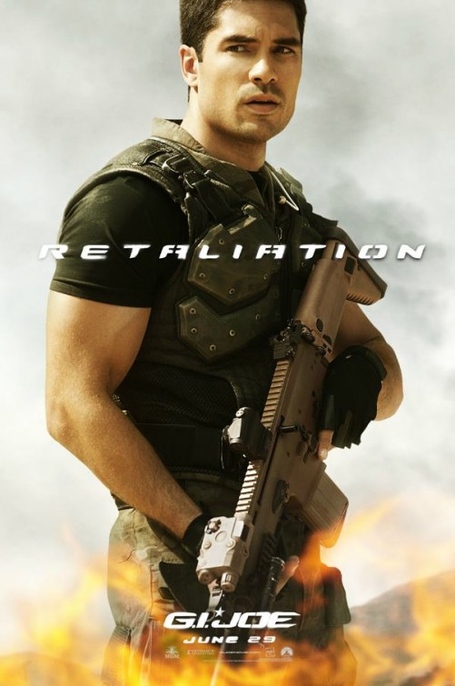 Fuck that. And fuck YOU, Los Angeles.

You've heard the phrase "Hell is other people?" Well all those people live in Los Angeles, and they are all jamming the 5 freeway from 3 AM Monday morning through 3:45 AM the following Monday. Everything you have ever hated about other people is magnified a thousand-fold in LA. The people are selfish, boring, oblivious, rude, pompous, self-indulgent, racist, dumb as shit, and either disgustingly rich or heart-breakingly poor.

Those who celebrate Los Angeles are celebrating every horrible instinct that human beings have. You're holding the species back thanks to your religious embrace of the culture of entertainment as a drug. Cheering for Los Angeles is like being one of the frothing masses assembled at a Nazi rally or the execution of Jesus.

Los Angeles is a sprawling disease, a fucked-up collection of dirty little towns that grew together and called themselves a city.

It's simply awful. And you know the worst part?

Oh, you want to talk about hockey? Okay.

Nobody in Los Angeles gives a shit about hockey, because nobody in LA cares about anything except themselves, the Lakers, and the Dodgers, in that order. 99 percent of the people here are blissfully ignorant of the fact that their local hockey team has a captain who is an inbred hayseed idiot: 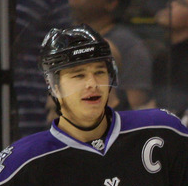 A starting goalie who alternates between really good and embarrassingly horrible: 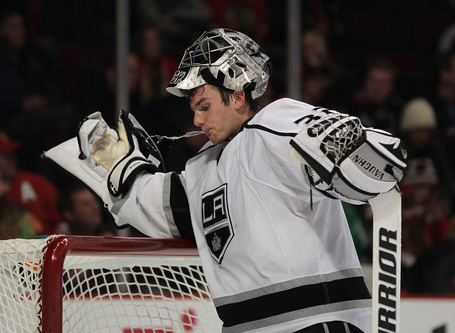 A number-one defenseman who is a sexual deviant: 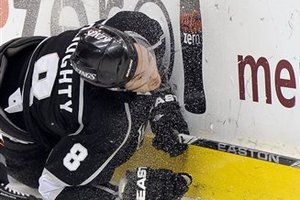 Or a top-line center who is wanted for war crimes in his native Slovenia: 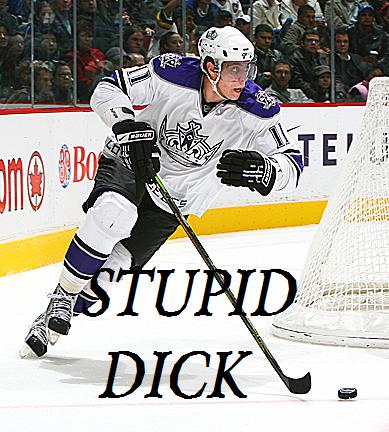 Which brings me to Mr. Dunn.

Dunn is the Kings writer on Battle of California, and has been since our previous writer died back in December. We had a number of applicants for the Kings writer position, but I chose Dunn because I misunderstood an eHow article I read and thought it would help me save money on my taxes. Now we're kind of stuck with him and it's really horrible, because it's obvious to everyone that Dunn shouldn't be writing anything other than a suicide note. I mean, just look at this gibberish!

Anyways, Dunn is yet another stupid person from Los Angeles (although I think he really lives in Riverside or some place) and we'd all be better off if he and the whole rest of this Metropolis of Smog and Shit would just walk into their filthy ocean and drown.

Prediction: Brent Burns knocks Kopitar into Quick and injures both of them. The LA crowd sees an injured goalie and begins booing, because that's what they do. The Sharks win 4-0.