After starting the series in a dramatic and controversial fashion, the Kings have now witnessed their two game lead evaporate after some really crappy play. But that's not important right now.

"Galiardi gets a penalty for running over Quick. Power play Kings. Kopitar just got sexually assaulted in front of Niemi."

The guest tweeting for the Kings would be Mr. Kevin of Kevin and Bean, KROQ's morning radio show. Back when I was a working chump before I retired to a a career of satirical hockey blogging, I used to listen to Kevin and Bean quite a bit. So I wasn't shocked Kevin made a joke regarding sex, in this case forced sexual actions along the lines of rape, which is always a pretty sensitive subject. However, running it on a twitter account other than his own...yeah, that didn't go over very well. None of you care about my opinion on this specific matter, nor do I blame you. In any case, since it was on the Kings' twitter feed, shit blew up faster than Hiroshima in 1945.

It got me thinking that we should really clean up our act here at Battle of California. Did you know BoC has 21 posts referring to Nazis? We mention child abuse 5 times, "bitch" is in 168 posts, and the act of murder is brought up on 91 separate occasions. This is reprehensible. All you have to do is search these terms. Really, just go crazy. Anything offensive. Just type it in the search bar. I guarantee you'll get a hit. The Hall of Fame is essentially a shrine to offensiveness. I have a whole post dedicated to disgusting Ohio based sexual acts. We have posts for drug abuse, senior abuse, stereotypes,laughing at those with mental disorders, homophobia, racism, blasphemy, and, yes, even rape. For the love of God, a Mississippi hot pocket. And that was just this season. I ran a series long (until I got bored with it) "Fuck count". No more State Rape either. From now on we will only have this: 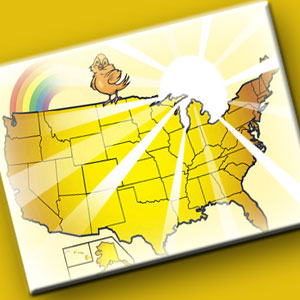 Awwwww. Now we can all be happy peace loving pussies while Canada is ran by the rainbow-loving sodomites that are developing a gigantic bird to attack North Dakota. And the Great Lakes are exploding. Guess that wraps up the Chicago-Detroit series. Thanks, Kevin and Bean.

God dammit. The Kings are doing an inverse of last year, and are now having a god awful post-season string of performances after a pretty impressive regular season. Even though the series is tied at two, I have hit a point of disenchantment so bad it feels like 2007 again. Just instead of finishing dead last, the Kings are fighting it out in the second round of the playoffs. Life sucks. Lose two more games so I can go on break forever, like Jer.

Prediction: The Kings win because I don't really care anymore. Or at least I say I don't. I don't know anymore.