The Sharks are heading back to LA for game 5. I hope they like the smell of urine!

As I have previously mentioned, I live in the greater (in size, not in quality) Los Angeles area. I don't spend very much time in the city itself, because it is so very horrible and unpleasant, but circumstances recently conspired against me and I found myself spending a few hours walking around downtown Los Angeles and Hollywood.

Here are some observations from my harrowing journey:

#1 The LA Metro subway system is full of some of the weirdest people you'll ever see. I am convinced that some of these subway riders have never visited the Earth's surface, and live and die down there amongst the trains and tunnels.

#2 There is not enough hand sanitizer in the world to make you feel clean after spending some time riding the LA subway.

#3 The Hollywood Walk of Fame is total bullshit. All the stars are covered in stains and grime and 90% of them are dedicated to losers nobody alive cares about and you have to pay a ton of money to get a star so nobody cool does it anymore and fucking Pat Boone has TWO separate stars and that's just insane.

#4 Right near Union Station, LA City Hall, and the courthouse there is this weird semi-underground mall that has a collection of shitty stores and restaurants which I guess are only open during the week because when I went there on a Saturday it was a super-creepy ghost mall. I took a picture: 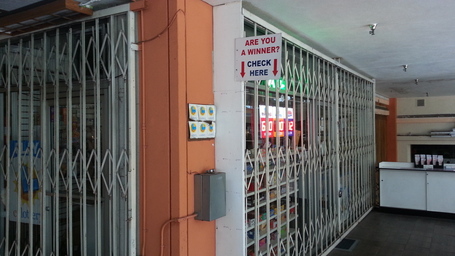 #5 Everything in downtown LA and Hollywood smells like fucking shit and pee and it's gross.

Say what you want about San Jose, I guarantee it smells a hell of a lot better than Los Angeles.

There's only one highlight you need from game four:

If you take a close look at this replay, you can see that the official clearly made a mistake by blowing the whistle early, and his actions unfairly robbed the Kings of a goal.

But if you take an even CLOSER look, you can see that it's totally hilarious.

Prediction: Sharks win 4-1 after Jonathan Quick gets thrown out of the game for punching a ref in the face.