Examining the most important player so far this series

T.J. Galiardi has proven to be many things so far this year. However, "effective in the playoffs" is not one of them. To be fair it has been a better year for Galiardi, though how much of that was due to Joe Thornton is pretty interesting to judge. Still, it hasn't been a great season by any stretch, and a "better" season for Galiardi is code for "skull-fuckingly awful" for anyone else. Galiardi finished with 14 points and only 5 goals, ending the year playing on Thornton's left. Through the playoffs he has only a single assist, despite having Thornton absolutely dominating play at time. He's failing at riding Thornton's coat-tails, something that is pretty impressive really. Just think, if the Sharks had a decent winger to give Thornton for his left, there's a chance this series could be swung San Jose's favor. Instead, T.J. has been running his mouth saying Jonathan Quick dives, while he's cross-checking goalies and getting leveled repeatedly.

I actually feel really bad* for Joe Thornton. He has made winners out of all his wingers, but Galiardi is proving to be his toughest project yet.

Ever since Thornton has come over from the Boston Bruins to San Jose he has turned just about every winger into a superhuman goal scoring freak. The most obvious was in Thornton's first season as a Shark, with Jonathan Cheechoo doubling his production. Cheechoo without Thornton saw his worst season ever, and he is now out of the NHL. Milan Michalek's run with Thornton during the same period as Cheechoo ('06-'08) saw a huge inflation in his goals also, only once replicated with the Senators. Devin Setoguchi had only one year primarily with Thornton and had a career year, going 31-34-65. His next highest total? 22-19-41. In Patrick Marleau's four years as a winger with Thornton he recorded his three highest goal scoring years ('09-'11). Dany Heatley scored a shitload in his first year with the Sharks and Thornton, staving off his downward spiral as a player (as a person he had been at rock bottom for a while already) for at least one more season. For the love of god, Nils Ekman was better with Thornton than he was with Sidney Crosby.

Last season, Joe Pavelski was Thornton's new right side winger and he scored a career high in goals with 31. This season was the first time in a while Joe Thornton had more of a rotating cast on his sides. Still, he made Brent Burn's time transitioning to a winger easy. Thornton's a godsend for any winger to play with. Except T.J. Galiardi. I can only assume the T.J. stands for Terrible Jagofff, because that has been all he has appeared to be since the Sharks acquired him. So be thankful, T.J. Be thankful that it was only Matt Greene that hit you, because there's a good chance Thornton has had enough of your non-scoring whiny punk-ass bitching and is coming for you.

But keep thinking the other team is diving, and that's why you aren't getting any breaks. Yes, because Jonathan Quick falling over after you cross-check him is the reason you can't score a goal with a guy who has made AHL players into NHL stars. Taking the initiative for accusing your opponent of diving, when you are reputable flopper yourself, works out great for building success and respectability. 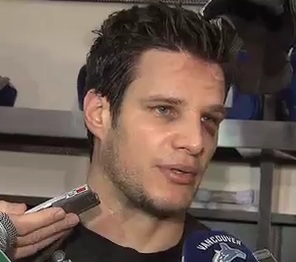 So thank you oh so very much T.J. Galiardi. Thank you for making Joe Thornton miserable.

Apparently I botched who has been Thornton's primary wingers over the years. Nevermind.

Prediction: Snoop said the Kings in seven. Guess that means that the Sharks win game six.