Yes, because of your body of water neighboring you, your entire city is stupid

It's not really fair on my part to say that those who live by an ocean are better people than those who do not. Take Florida for example. They are surrounded by ocean, but holy shit, it's Florida. However, find me a good city not by ocean. You can't do it. People on the side of not-near-oceans tend to claim, "But Chicago is wonderful!" 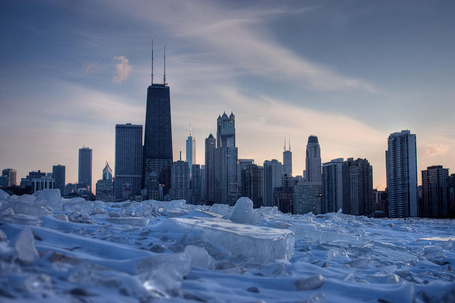 Usually, then comes the defense regarding other, lesser, bodies of water, such as lakes and rivers and puddles and toilets.

Worst of all, your precious little lakes make Chicago even less bearable. Chicago lies at 42 degrees North latitude. Coincidentally, that's the same latitude for the state line of California and Oregon. Looking at a city right on the border next to a far superior ocean (Crescent City for example), and comparing their temperatures, it's nice and temperate 66-39 degrees in California. All the way south in San Diego, the range is about 77-48. Los Angeles does get rather hot with a range of 84-47. But Chicago is between 84-18 degrees on average, which is only normal if you enjoy bipolar climates of ball sweating hot or freezing boogers cold. Plus you get the humidity and snow, and all that other unfortunate business like fat people and the Cubs.

Not to mention you are going to die.

As to the manner of such, well, it can be a number of things. Will you freeze to death in a terrible ice storm? Eleven people died in a blizzard in 2011. I'm fairly certain the last freezing related death in California was the Donner Party (also the last cannibal related incident in California). Except that the Donner Party was from Illinois. They had brought their culture of freezing to death and eating people with them. Thanks for that. You jerks can't even get to California properly. Luckily, natural selection took care of most of them.

More likely your corrupt police will kill you, or will it just be some pissed off pedestrian? Perhaps one of your mayors governors will help you (your mayors just scream at you and call you retarded, so frankly, they're okay), except that they are probably in jail for god knows what. But wear the title of most corrupt city in America proudly, Chicago. It's not like you will forever have that title. On second thought, yes it is. You are a dynasty of it, costing your city $500 million dollars. Racketeering, fraud, corruption, taking bribes, bribing others, perjury, extortion, money laundering, and this goes along with your actual organized criminal activity that's been prevalent since the 1800s. Chicago makes The Wire and Baltimore seem like the Garden of Eden.

Oh, but you gave us Obama? Awesome, now I can expect a drone strike on my house. Thanks for providing us with terrorist number one, Barack Saddam Hussein Obama, the secret socialist Muslim! California government officials and police never do anything wrong. Well, unless...you know, you're Rodney King. Or live in the city of Bell. Anyways, Cheering for the Blackhawks is comparable to cheering for terrorism. At least if you are a taxi driver or Valtteri Filppula.

Though when all else fails, Chicago has their athletes and sports icons to fall back on. What about this well respected, composed man here?

And that kid crying Roenick was talking about? We can only surmise that he killed himself later for the letdown Jeremy provided him with. Way to go, J.R. You're a murderer and a failure.

Also, your logo is racist.