A little over a week ago Dustin Brown received his first suspension in his career. He has always been a player that threw a lot of hits, and some of those hits were questionable. Except that Brown had never received extra punishment because of them. Again, that was up until last week where he readied (or braced as some people have said) for contact and stuck out his arm and elbow whilst having the puck, and instead had his elbow plant squarely in the face of poor Jason Pominville who went in low. If Brown never extended his arm to injure someone, nothing happens. If Pominville hadn't leaned down for the poke check, nothing happens. Instead both things occurred and now Jason Pominville's brain has been replaced with old mashed potatoes, and Brown sat out for two games (to think about what he's done).

Gone now is the label of a "hard-nosed guy, playing on the edge". Instead it is "cheap shot artist". So now that Brown would be classified as a repeat offender if there was ever a hearing with ol' Sheriff Shany again, what does he do?

For shame. He viciously trips Jaden Schwartz! Brown was never this type of player beforehand. Tripping players with his stick AND his leg! And while throwing a glancing forearm off their shoulders! Dustin Brown's morality as a hockey player has been thrown to the wind by the misguided "justice" of Shanahan, and now we are looking at another Raffi Torres or Corey Perry. In that this "hit" won't be reviewed at all because Schwartz got up, and Brown was assessed a two minute minor for tripping.

But Brown's reign of terror didn't stop there. He then later took a run at Brian Elliott, crashing into the poor netminder, who took a WHOLE minute to gather himself and then played the rest of the game. Meanwhile, Brown skated off like it was no big deal, despite the sins he had just committed. Sure he may have fallen over and slid into Elliott, but there was intent! I hope the NHL is pleased with itself, letting dirty plays like this continue in their game they are trying to desperately to clean up.

But no. They have simply brought to light that Dustin Brown is in fact a dirty player. Captain Cheapshot. A Brown spot on the NHL. If only he hadn't ran into that Dallas Stars player who's name isn't important enough to remember! That guy would have never smacked himself in the face with his own stick then. And many a bad hit later here we have Brown missing a hit, and tripping someone violently without remorse. No one is safe from these evils. BROWN IS COMING FOR YOU. LOOK OUT. 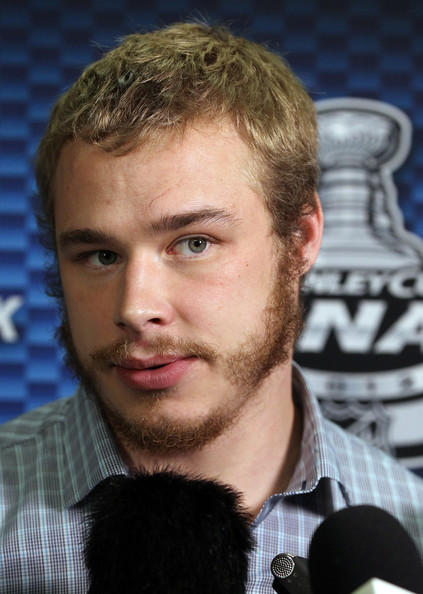 Not even Los Angeles Kings tickets are safe.

The Kings are now in dire need to get their shit together, lest be bounced in the first round. Thankfully they are headed back to Los Angeles where they have performed a lot better during the course of the season, and not nearly as awful recently. Still, there confidence has to be rattled after scoring only two goals in two games, and being behind two games. I'm sure Jewels from the Crown has more depressing stats for you.

Prediction: Brown kicks Jaroslav Halak (while he is on the bench) in the nards, punches David Backes's wife in the face, and drowns an infant in a bucket of blue paint.