The Ducks took a lot of dumb penalties.

The Ducks were victimized by poor officiating.

The Ducks got shafted by an early whistle on a goal.

And yet the Ducks still walked all over the Red Wings in Game Two's 3rd period and were able to force OT after being down 1-4.

If you're a Wings fan who feels comfortable about what you saw in games one and two, you are some sort of high-level idiot.

Game Two's performance reminded me of an old Earl Sleek cartoon (if you don't remember Sleek, don't worry; he's just some washed up nobody who used to write things about the Ducks before I came around). I used that cartoon as well as another one from the archives in order to Frankenstein a brand new comic for you guys, which kind of describes how I feel both teams played: 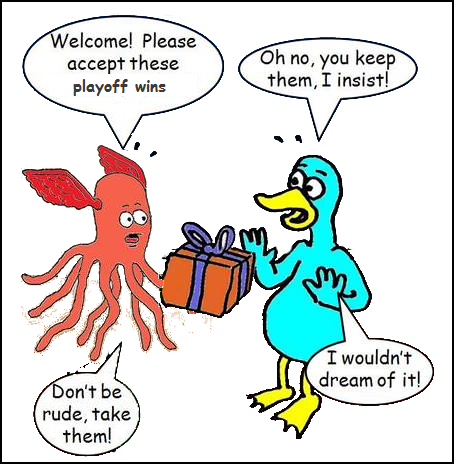 Get your shit together, Ducks. Play the whole game the way you played the last 10 minutes or so of period 3, and the Red Wings don't stand a chance. We've solved that goon Jimmy Howard, it appears, or at the very least have gotten inside his head.

Now, how about a little discipline and a 60 minute game?