Chicago is a pit of indecency

The Chicago Blackhawks are a racist team. There is no arguing it. Their name is derived from a Native American tribe leader. Black Hawk lead the Sauk tribe in fighting against the American settlers taking over his land in Illinois and Wisconsin, primarily after the United States ignored a treaty they had made up anyways really (something of a shocker, I know). Black Hawk was eventually defeated and captured, but not before whitey killed hundreds of his tribe's women and children.

So Chicago decided to call their team the Blackhawks, named after the chief, and naturally decided to use a severed Native American head. Thanks for the land, and thanks for your head! And the term "black"? Try African-American Hawks next time.

But Chicago of course wasn't content with one racist team. They had the Chicago Black Sox, which are now the White Sox. What was wrong with the Black Sox (besides the indecency surrounding the term "black" again)? Was it not good enough? For shame, Chicago, for shame. However, there's still time to fix your problem with being ignorant fucks! It's caaaaalled aaaaaa maaaaaake ooooovaaaaa!

First, let's start with something that better identifies with your city instead of a Native American chief who's land you stole. We could go with a steaming turd on snow or a lake (which are pretty similar admittedly), but we have already sort of done that idea with the Colorado Avalanche. No, I'm thinking something that is prevalent throughout Chicago, and that you can't miss wherever you are there. 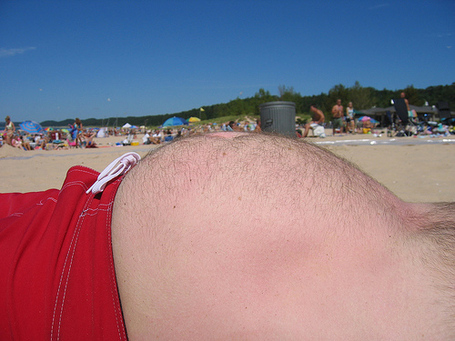 Perfect! I bet it's even on the shores of your smelly lake. To be fair, it is necessary to have the girth, otherwise you may freeze to death. Now we just need to turn it into a logo and slap it on one of your jerseys! Let's just call you guys the Chicago Gastric Bypass Candidates from here on out. It has a nice ring to it. G! B! Cs! G! B! Cs! 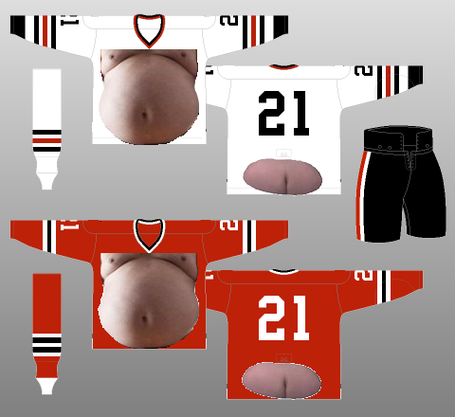 It even comes with man boobs and ass crack! Looks like my work here is done. You're welcome, Chicago. Good luck not being racist anymore.

Jonathan Quick getting chased from game two I think may be one of the better things to happen this post-season for the Kings. It was a back-to-back, and Quick was getting worked a ton every game already. It gives him a slight breather, but more importantly, it sends a wake up message to the Kings who have looked lethargic every road game in the playoffs so far. With two must-win games at home, hopefully Los Angeles is finally aware there is hockey still being played.

That being said, I really think Dustin Brown has to give his teammates a slap in the face to maybe fire them up a little bit. At least Alec Martinez played (and fell down, leading to a goal).

Prediction: I am watching this time, unlike on Sunday. The Kings are at home, need to win, and are not under the curse of no Dunn (0-5 or 6 this year, including a 0-2 in the playoffs). I'm thinking a win this time. Probably 2-1 because it always is.