By now, you all should know we here at the Battle of California like our history. We talk about days long past, and reflect upon weirder times when the Sharks had guys named Marco and Arturs. We even recreate spectacular events. Like the 5-1 drubbing the Kings put on the Ducks February 25th, 1994. Yes, it was a glorious, more pixelated time. I still play EA Sports: NHL 94 (TM) regularly, along with NHL 2000, '02, '07, and '09. I would get the newer ones also, but I don't have a Playstation 3 (wink wink). My associate and known baby producer, Jer, even offered up a post on why NHL 94 is the greatest sports game ever.

But while it is the greatest, it's not perfect. There's a few flaws in the game, specifically with the Los Angeles Kings that really have a few parallels to today's Kings. Fortunately, being the model of perfection that I am, I can help out.

I don't mean the gameplay or sound, or anything like that having any problems. No, no, that was all awesome. I mean the ratings of the Kings lineup. Criminal. Wayne Gretzky is only an 87! An 87! Centers ahead of him include Doug Gilmour (!), Adam Oates (!!!), and Jeremy Roenick. I'm sorry, but in this case you are wrong in your analysis. It really does have a current comparison with a center on the Kings who is often overlooked. Even getting some spotlight in the Olympics and captaincy with the Kings hasn't helped this two-way dynamo gain the recognition he deserves. Trevor Lewis is long due some respect. By the end of his storied career I don't think it will be too far-fetched to see the Kings immortalize Lewis the same way as Greztky with a statue. I even got a pose all picked out. 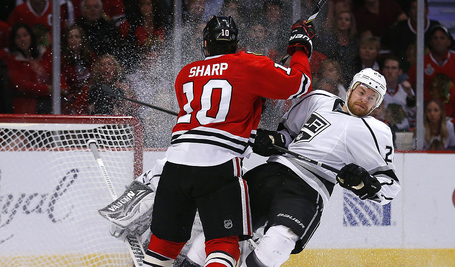 Then there is Rob Blake. Yeah he was pretty young at the time being, but a 72? You mean to tell me some guy named Zarley Zalapski is better? I've never heard of him, so I'm pretty sure he isn't. Goaltender Kelly Hrudey is only a 58?!?! Well, at least he was still better than Guy Hebert. But Hrudey brought stability to the net for the first time in a long while for the Kings! Recently so has Jonathan Quick. In NHL 14 Quick's reportedly a 91. I think it's fair that Hrudey should have been a 91 also. Today's young budding star blueliner for L.A., Drew Doughty, you have ranked as an 88. Fair. But behind P.K. Subban? Never heard of him either. Who's named "P.K." anyways? I assume one of your programers was just messing around and made up some player.

Anyways, back playing NHL 94 some memories just stuck with me. Like running the goalie with Tony Granato, injuring someone with Marty McSorley, and getting smoked repeatedly on defense with Darryl Sydor...it really brings back the nostalgia of both playing the game and watching the Kings at a young age. And the similarities today! Dustin Brown charging netminders and injuring people, while Jake Muzzin falls over because someone did a toe-drag...