Quite the Sean Avery update

Hey! What's Sean Avery been up to?

Oh. Would you look at that. Everyone's favorite jerk-ass is finally getting married! And good for this Andy Cohen fellow. It's nice to see someone be open-minded about accepting douche bags in today's world. Whether or not this rumor of Avery being engaged to a dude is true, it's provided interesting discussion. Specifically at my favorite haunt, the Yahoo! Sports comment sections.

Nothing is worse than gays being all stupid and depraved and getting married possibly like everyone else.

I have to say, having the Black Keys headline Butt Fest this year was a questionable move. Though who are we kidding? Butt Fest hasn't been the same since the 80s.

and to think I used to want Avery's sloppy seconds(Elisha Cuthbert)....NOT anymore. Tell me it ain't so...

So this guy wanted Avery's leftover man-juice delivered by a woman, not a man.

what a fruit. that's fruit yahoo . so go ahead and censor fruit. you #$%$ lovers

This really makes Rudy's "The NHL on NBC Visits a Fruit Stand" post a little different.

What in the fifty fucks.

so he was aq corksucker after all!!! hope he gets a disease!!

Hahaha, look at this guy's name!

Serves him right for being a jerk and a sore loser, but now add gay on top of that. Back at you, gay boy.

The worst punishment one can get for being a jerk and sore loser is being a gay sore losing jerk . Not to be confused with the Pomeranian Leash Yanker.

He is a degenerate flamer. Who cares if he was a Rump Ranger in the NHL or not. And "engagement"? Give me a break. Homosexuals, especially male homosexuals are promiscuous and spread disease. The only thing they are engaged in is abominable sin. Their relationships are prone to disease, violence, mental illness and premature death. have at it boys. Takes them out of the gene pool.

Figures an ex King would be a fagit. Just like the rest of the team.

Shit! He discovered their secret!

seeing perverts with the flag draped across them makes me want to kick them both in the face....gay or straight you don't drape a flag on you like it is a dish towel..( i do suspect it is a towel which is just trashy)

Okay, you get the idea. They go on like that either saying they are "disgusting faggits LOL" or "Yahoo is pro-prevert". Pretty insightful conversation for something that probably isn't an accurate bit of journalism. It's great for a laugh, or for feeling like you lost your faith in humanity. Now what is a crime against man are those new Sabres' jerseys. Good lord. 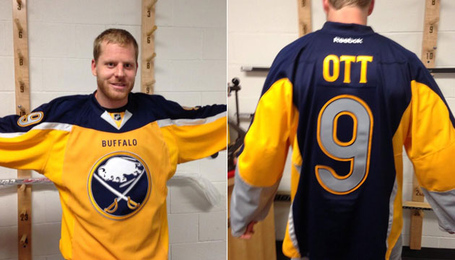 At least they kept up with Battle of California's mandate for having buttholes on them.