You know. Instead of "Twelve Angry Men". Anyone?

Share All sharing options for: Kings Gameday: One Angry Ben

Quite the week for Ben Scrivens. Usurped by the return of Jonathan Quick, traded away in favor of Martin Jones, exiled to Edmonton, suffering under their shitastic defense, and then exploding on twitter after some guy tried to write a sarcastic post about his wife. It's understandable why Ben is pissed. Going from Los Angeles to Edmonton is like going from paradise to hell (or Edmonton). Edmonton should be lucky that Scrivens didn't burn the city down already. And while the trade of Scrivens may seem like a return favor from the Kings for Wayne Gretzky, don't expect teams popping up in shanties across Nova Scotia and Newfoundland.

However there is an interesting coincidence. The same day Ben Scrivens finally snapped, "The Professor" from Gilligan's Island died. Now it's absolutely clear to everyone The Professor on the show was a character representing complete control and power, akin to a king or God. He was always referred to as "The Professor" by people that had been stuck on that stupid island for years, though I always thought he harbored a dark secret. That he was a complete psychopath. I don't mean the character, I mean Russell Johnson.

"Well, your character name is Ray, and-"

And then there was the alcohol abuse! 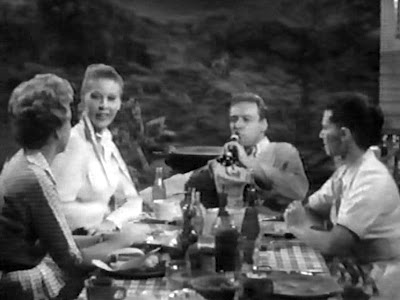 My theory is Johnson got so obsessed with The Professor that upon his death after his life sustaining coconut powered respirator failed, he possessed another professor: Ben Scrivens. Ben has already shown signs of being completely unstable and volatile, and it's only a matter of time before he begins referring to Jenny Scrivens as Mary-Ann. When he finally gets new equipment for the Oilers they will made solely of coconuts. He'll be drinking between periods, talking down to everyone around him, and being perpetually wrong despite his dead set attitude of always being right. Well, it's not like the Oilers are going to be worse, so I look forward to this development.

Since we already had voting for the Red Wings (which Todd Bertuzzi won easily), today we have a team nobody really cares about: The Nashville Predators. Unlike most teams, the process for picking out jerks on the Predators is difficult. Because I have no idea who these people on their roster are.

You may have heard of him. That's why he's on the list.

His wife sings that annoying Sunday Night Football song that makes you want to pick out your eardrums with an icepick.

It's his job to be a prick. Does anyone else know more about him? What about anything else regarding Nashville?

Seriously, tone it the fuck down there Nashville.