This piece of shit

Corey Perry. Even his name just drips of being a whiny little turd. Little Corey Perry. Little pimply brat. Little rat dick. "Ooooh but he scores goals!" I will grant you that. He also runs goalies, flops around like a dying fish, and is a petulant crybaby pest akin to Joffrey from Game of Thrones.

Even his former teammate now current teammate again, Dustin Penner, acknowledges that Perry is a little drama queen. So while the Kings' Dustin Brown may fall over a lot, he's no complainer. Perry meanwhile has hissy-fits and spears goalies in the throat. Well, when he's not waxing his best friend's bald head that is.

So here we have a brief biography on Corey Penispump Perry:

Corey was born in Peterborough, Ontario where his mother squirted a dump out and was shocked to find out it was sentient. Instead of flushing it, she threw it outdoors into the cold. Don't tell me that May in Canada is warm out. It's Canada, it's always frozen. From there, Corey learned to skate at an early age, and learned that people were utterly detested by him. After surviving on nothing but pine-cones and his own urine for years, a hockey scout discovered Perry behind an outhouse in rural Manitoba. Shocked by Perry's skating ability and ability to make people in his proximity vomit violently, Corey Perry landed a contract. 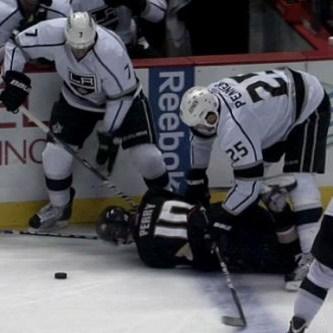 Perry would go on to embarrass himself numerous times. Unlike Dustin Brown, who's antics are cheeky and fun and that only hurt guys that suck at hockey and who don't belong in the NHL anyways, Corey Perry is just a feeble mess. He's the Farva of the league. This is a guy who hates his own fans. It's an addiction of behaving like a pathetic cow pie eater. The first case of his embarrassing bullshit in the league would be engaging with Sean Avery, where Avery proves how to be a proper douche bag.

Learning nothing from his rookie year miscues, Perry was than pounded on by freakin' Chuck Kobasew of all people after Perry took a run at him.

The ensuing postseason would get Perry to wind up with yet another foolish spectacle, but now on a larger scale. After getting scored on, the Ducks resorted to thuggery where Ryan Getzlaf picked a fight with Miko Koivu. Perry would antagonize the then innocent Brent Burns. Burns lost his mind and proceeded to thrash Perry.

The next year was a busy one for Perry. He was mentored by famed nut sack Todd Bertuzzi, and Perry figured himself invincible. It came to a clownish climax when Bertuzzi attempted to fight a goaltender. Perry took the opportunity to punch James Wisniewski while he was down and Wisniewski took exception to that and turned things around on Perry, who was shocked that James would do something so classless as hitting a downed opponent.

Featured in the 2010 season, David Backes went on a tear fighting basically everyone and everything associated with Canada. Perry took it upon himself to defend his nation's honor, and now there are skid marks all over Canada's flag.

I have absolutely no idea what Perry did here to set off Keith Ballard, and oh wait there it is.

Did I mention Perry is a racist? Because he totally is. He attacks Wayne Simmonds, only to, not surprisingly, get beat up one more time.

The last one we have on display is the greatest. Little Dan Boyle throws a check on Corey Perry, and Perry tries to show how manly he is. Hilarity is a go.

I mean if you are into bald, fat jerks then Getzlaf is okay.

Just look at the guy. 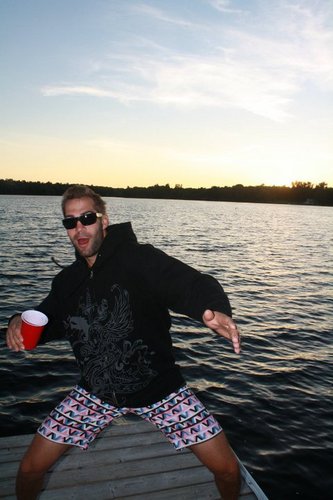 The guys calling games locally tend to grow attached to their team/employer. Part of your job is talk up the team night in, night out. It gets difficult to be critical after a while, but it's important to not be a "homer" so to speak. But then there is Brian Hayward who over the years with the Ducks has not only developed a relationship with the team, but has grown insanely attached. Sort of like Swimfan. No one's seen it? Well, that's for the best probably. Hayward has said opponents of the Ducks have faked injuries, makes claims teams are playing dirty against Anaheim, and really wants Getzlaf to win MVP. I'm fairly certain he is responsible for a portion of the Ducks' fanbase to be as crazy as they are.

Prediction: Jonathan Quick vomits violently. Corey Perry gets beat up by a Zamboni driver after Perry slashes his tires.