Dustin Brown is a worthless piece of shit, and people are finally starting to figure it out. Kings @ Ducks.

As is tradition here at Battle of California whenever two teams from the best state in the union face off against each other, today's posts have a theme behind them. Today's theme discusses who the bigger piece of shit is: Dustin Brown or Corey Perry.

Trashing Corey Perry is the easy way out, as he has quite the reputation. Dunn is simply pandering. He knows you don't like Perry. But at least Perry, in all of his assholery, is smart about it. Perry is methodical. Perry knows exactly what he's doing. He's a pest that gets exactly the reaction he wants, and he is highly effective at being a distraction to opponents, throwing them off their game, and getting inside their heads.

Dustin Brown, however, is merely a violent buffoon.

Kings fans are fortunate enough that Brown doesn't get the reputation calls from officials that Perry sees or even suspensions after he intentionally murders promising rookies, but fans from around the league are starting to realize just how awful he is. In fact, I've talked to a few of them lately and want to share my findings here today with you.

I should point out that I never mentioned Perry while talking with these people, as, you know, I didn't want to damage my credibility. Sorry, everyone who gave me Dustin Brown quotes, you all unknowingly helped me put together a pro-Perry article. You'll probably want to shower.

Anyway, here's what some folks around SBNation had to say about Dustin Brown.

The obvious place to start, of course, is my colleague here and BoC's Sharks writer, Mr. Megalodon. Here's our brief conversation: 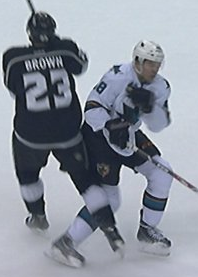 Jer:
Oh hello there, Meg. I'm working on a BOC article, and I'm interviewing those most impacted by Dustin Brown. Please explain how Dustin Brown has hurtl you and why he is a piece of shit, in your own words.

Meg:
Dustin Brown is a dirty motherfucker. He sucks at hockey so badly that he actually functions as anti-matter to hockey skill. When he comes in contact with a skilled player they are annihilated. He sucks fun and joy out of the world wherever he goes. He didn't like the movie Gravity. He hates dogs AND cats. He smokes clove cigarettes. He outs transsexuals for fun. His brother is Skip Bayless. He always leaves lights on when he leaves the room. He is the human equivalent of a hair on your tongue.

J.J. (from Kansas), Winging it in Motown

The question I asked Meg is similar to what I asked everyone else. Here is how Red Wings blogger JJ answered:

For us, Dustin Brown is that shithead kid in the next neighborhood over that reminds you why you don't want to live there.

I think JJ is implying that Dustin Brown is so awful, it's why the Wings left the Western Conference. So, thanks for that at least, Dustin. You're still a piece of shit. 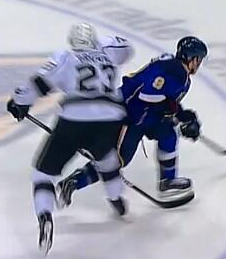 Really appreciated his flying knee-elbow during the playoffs on Schwartz. I think that's just his way of saying hello to rookies. No love lost for him anywhere, honestly. I'm kind of unhappy still about ruining Hertl's rookie year. Kid had something going. Anyone deserves better than a Dustin Brown Special. I wouldn't wish it on all of the Blackhawks.

Folks from Five for Howling

The editor of Phoenix Coyotes blog Five for Howling sent me this collection of quotes on Brown from his corner of the web:

Dustin Brown is the American Esa Tikkanen. You hate him unless he is on you team, in which case you lie through your teeth about how happy you are he plays on your side.

Team USA has a real shot at Olympic gold because Dustin Brown has so perfected the art of slew footing knee-on-knee contact causing injuries that the Olympic zebras won't be able to detect it.

I would pay $25,000 to suit up for the Coyotes and fight Dustin Brown. He's a cheap shot artist that hides behind Richards. He's a punk and I can only hope that karma will lead him to a blown out knee.

Okay this guy below clearly didn't understand the assignment, I guess I didn't explain it properly. Who are you fooling with your diplomacy, here? Anyway, I bolded the relevant parts, you can skip the rest.

I think Dustin Brown is everything I would want the captain of my team to be--tough to play against, a big hitter, a timely goal scorer, and good in the community. I'd prefer he dive less and not try and justify his questionable hits, but he's answered the bell when he's been challenged by a guy in his weight class (the fight with Doan after his hit on Klesla was a classic). Overall, I just think he's a bit goofy and a fun guy to cheer against because he's not on my team. But he's not in the same league as a Steve Ott or Matt Cooke as a guy that you just despise.

When I asked Minnesota Wild fan and blog editor Emilie to share some thoughts, I got this enthusiastic response:

HAHAHA oh would I. I'll get something your way tomorrow AM

I then never heard back, even after a followup request. I imagine Emilie was so enraged with anger while thinking about what to say about Brown that she self-immolated.

The Neutral, Fear the Fin

The last word on Dustin Brown:

Fuck Dustin Brown. At least the other franchise villains the Sharks have accrued over their history, ranging from Eddie Belfour to Chris Pronger to Brian Campbell, were all terrific at hockey in addition to being gigantic asswipes. Brown, The Coward Who Kneed Tomas Hertl, doesn't even have the courtesy to be that. Don't be fooled by the fact that he wears the captain's "C" for one of the best teams in the league. The Kings would probably make Raffi Torres captain if they had the Sharks' roster. The reality is Brown's career high in goals and points was achieved 6 years ago and, at 29 and mired in a season in which he's being outscored by such offensive dynamos as Ryan Garbutt, Marc Arcobello and Kris Russell, it's readily apparent he isn't ever going to top those numbers. Sure, he flops at every chance he gets which inexplicably still earns his team power plays because the NHL is officiated by people with less critical reasoning ability than Brown himself, and he's pretty great at that all-important skill of riding Anze Kopitar's coattails, but Brown is a glorified third-liner at this point in his career. The most valuable thing he's done for the Kings all season is knocking out a division rival's star rookie forward (which, in turn, has apparently placed a hex on their team and consumed their own promising rookie in the process). Hertl will be back and lighting lamps across the league again eventually. Brown never will be. Enjoy the next eight years at nearly $6 million a pop, Kings fans. Fuck Dustin Brown.

Dustin Brown tries to throw a knee-on-knee hit and/or an elbow at Jakob Silfverberg.

Checking in to see who offended the most grandmas.