Today it seems to me providential that Fate should have chosen Los Angeles as Dustin Brown's home team. For this large town has always sat on the precipice of becoming a hockey state that the younger generation have made it their life's work to bring it to prominence by every means at his disposal.

The beginning of our young man's life is not overly important. He spent many of his days playing hockey; he also spent time painting, although he eventually was told he was not good enough at it to make it a career. The man who told him this had knees, something that Dustin Brown remembered all his life.

Brown first came into prominence when he joined a Los Angeles Kings team that was in a state of chaos. The once proud Kings had suffered losses in the Great Playoffs and were now a sad, disgruntled team. To Brown, it seemed clear what was to blame for this: the betrayal of the Kings from within by Rob Blake and, most importantly, the knees of the other teams. Brown, despite his lack of experience, tried to take leadership of his team. This attempt was doomed to failure, as the leaders on the team easily defeated him and made fun of his ugly girlfriend. Brown was not broken, however; he simply waited for his opportunity to try again.

That opportunity came in 2008. A great depression had brought the Kings to their lowest point. The austerity measures of their previous captain, Rob Blake ("The betrayers were running things!" shouted Brown), were a dismal failure, and he was exiled to San Jose. Brown offered energy and a New Order for the Kings. A deal was struck with Terry von Murray, an aging but well-respected coach, to make Brown captain. His lieutenants, Matt Greene and Anze Kopitar, were named Alternate Captains of the Interior.

The team improved quickly under Brown's iron fist, albeit through rather underhanded means. People's right to enjoy entertaining hockey was quickly stripped away, and the rights of people to have knees were curtailed by Brown personally over a period of years. Brown also continued to consolidate power for himself, appointing Mike Richards as the head of his Brownshirts to keep the populace in line. (Because his name is Brown, you see.)

The death of Terry von Murray gave Dustin Brown almost complete control over the Los Angeles Kings, with only one thing standing in his way: Jack "SA" Johnson. Johnson had gained a cult following among Kings fans and his popularity stood to rival Brown's. Then came the "Nacht der Langen Messer" (roughly translated: "Night of Long Trade Calls") and the banishment of Johnson. With Brown's control over the Kings now total, he turned his focus outwards.

The league's first major interaction with Brown came when Brown took the knees of the Czechoslovakian player Michal Rozsival. Brown argued that he needed "living space" on the ice and Rozsival was occupying that space. The rest of the world howled but Brendan Shanahan gave Brown what he wanted. Afterwards, Shanahan would say that the agreement would bring "Peace in our time." This would prove incorrect.

Just a short time later, the previously unthinkable happened: Brown declared war on the NHL. Brown unleashed his blitzkreig attack on the New Jersey Devils and steamrolled the Polish Travis Zajac before turning and destroying the French(-Canadian) goaltender Martin Brodeur. This was especially surprising since Brodeur was well-regarded and had heavy fortifications all along his net; alas, his lack of mobility and complacency ended up being his downfall. With these crushing victories, Brown made sure that everyone knew his ruthlessness, his savagery, his horrible facial hair: 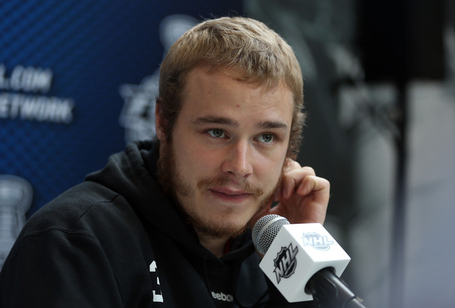 Now, here we are, standing on the precipice of total victory. Brown and his Brownshirts will not stop until all the NHL is under their thumb and right-thinking Los Angelenos achieve total victory! Let the hymn of our forefathers ring gloriously over the bones of our felled enemies! And let nothing stop us until we have many, many more championship banners hang from our rafters up there! (*points with four fingers on one hand) Hail Brown, and hail the Los Angeles Kings!

Prediction: Brown betrays the nonagression agreement between he and Slava Voynov and knees him.