Before tonight's Blue Jackets @ Ducks game, let's take a look at the world of hockey and graphic novels. Another serious post!

We've talked about comics here on Battle of California before, and maybe we've brought up hockey once or twice. Now lets put these two things together.

You may recall a couple months ago I posted some information about a retro-style hockey video game tournament which you could win some cash by participating in. The video game and the tournament, as I explained at the time, were setup to help promote a new graphic novel written by Howard Shapiro (illustrated by Marcia Inoue, colored by Andres Mossa) titled The Hockey Saint.

While the tournament has been postponed (new date to be announced), Shapiro's graphic novel is out now, and I'd like to take some time to talk about it. I read an advanced copy back in August, and I've had the pleasure of some brief back-and-forth correspondence with Shapiro, an incredibly nice guy. Here's my review of his book, and I will point out that this post is not a paid sponsorship or advertisement.

Here's the official synopsis from the back of the book: 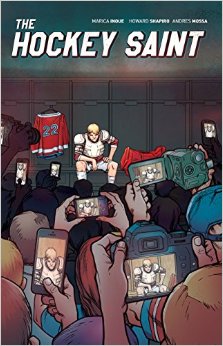 Twenty-one year old Jeremiah Jacobson is the world's best hockey player, but he wasn't prepared for the frenzy and scrutiny that came with that title. Tom Leonard is an average college sophomore... just a guy trying to find his place in the world as he sorts through issues that are both very real and seemingly insurmountable.

Through a chance meeting, these two strike up an unlikely friendship. Their bond is tested when Tom discovers that his idol isn't as perfect up close as he seems from afar. With Jeremiah living a little too much in the moment and with his past catching up to him, will Tom be able to help him before it's too late?

First off, I should point out that what I perceive as the target audience for this novel is quite a bit younger than who typically visits this site. It definitely has a "Young Adult" fiction vibe. That's not particularly uncommon with many graphic novels however (nor is it a bad thing), and Shapiro's work was enjoyable and worth the read (but don't expect the type of crass, adult humor you find on Battle of California).

The Hockey Saint is part two of what will be a trilogy, but I had no trouble following along having never read the first in the series The Stereotypical Freaks. The novel stands on its own, not requiring the background from it's predecessor.

The novel touches on a number of themes; failures of traditional media, substance abuse, hero-worship (and, alternately, vilifying those about whom we don't know the full story), morality, and friendship. The novel is an attempt to reveal the individuals behind celebrity, who are of course just as real as the rest of us. The Hockey Saint does a good job of showing how athletes and celebrities have lives just as nuanced as our own.

When I started reading it, I was uncertain if the "young adult" targeted novel would keep my interest, but it certainly ending up keeping me engaged (and it didn't hurt that it was a quick read, at 150 pages).

If you wanted to check out Shapiro's work but also save yourself some money, the Kindle edition of The Hockey Saint is on sale for $2.99, though that pricing is for a limited time. A paperback version is also available, either through the publisher's website (Animal Media Group) or any other online outlets you would typically buy your books through.

Oh, and even though the tournament is being pushed back a bit, you can still go play The Hockey Saint Video Game over here.

To get you in the mood, here's a clip of West-Coasters being fed some disgusting slop that Ohioans somehow call food.

Jeremiah Jacobson gets called up to play for Columbus, and the Ducks just can't compete. Anaheim falls 2-1.