The Olympics are over, but the gaudy jerseys live on

Since the Olympics have come to an end finally, I figured now was as good a time as any to critically analyze the Olympic hockey on display. I don't mean the play itself, I mean the jerseys. If I learned anything from Sochi it's that pink eye is very off-putting, and that Johnny Weir takes fashion to a whole new level. Fashion was the standout in Russia for 2014, because it certainly wasn't their hockey team, so here I present to you the best and worst looks of Sochi.

The runner-up to the runner up: Finland 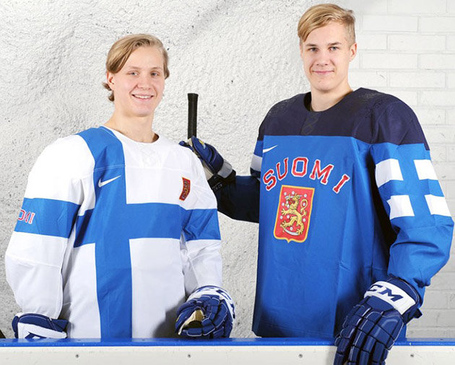 Boooooooriiiiiiing. I've never been a huge fan of flag jerseys and Finland's lights certainly fit that bill. Add the fact that their flag sort of has a Jesus! thing or Super Smash Brothers logo going on with it, and this is certainly a "meh" look. The dark jerseys also have a Winnipeg Jets feel to them, and racism hasn't been fashionable since the 50s. The sleeve design looks like it was part of a Windows 8 package. Nice Game of Thrones sigil you got going on for the logo, too.

The runner-up: The Unites States of America 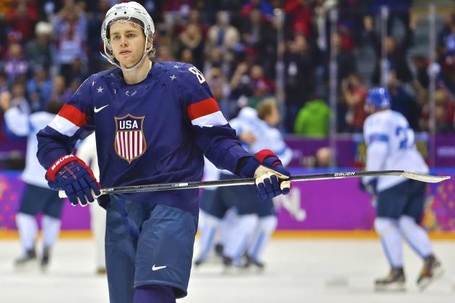 It pains me to include the ol' US of A on this list, but oh lordy what a train wreck. The inverse Poland sleeves. The USA shield. The snot star shoulders. The American jerseys were always better when they went with simplicity, however these sweaters looked like they belonged to Simple Jack. Nike did no favors with the designed laces (which to be fair they put on every jersey because bad taste should go to everyone), but the stars were a little too Liberace without the over-the-top elements.

The worst of the worst: The Czech Republic 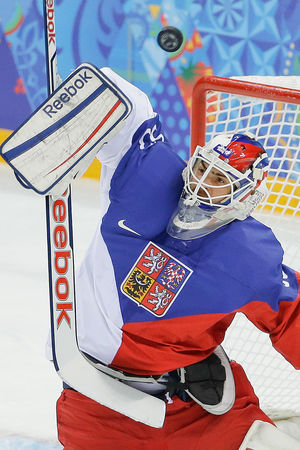 Oh look, another flag jersey. Except this one looks more like that Simon game. "BEEP BOOP UGLY". Another shield/crest logo except this one features four sigils instead of one like this is Hogwarts sweater belonging to the Weasley family. "Trifectus Hideous". The color scheme is all over the place as a result of the equality for all colors front, and it created a downward arrow appearance. That much was appropriate for these jerseys, as they demanded to be thrown on the ground instead. These rags were about as awful looking as Ondrej Pavelec. What do you think, Johhny? 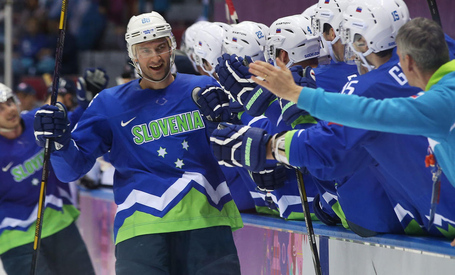 Nothing says fashion like being daring. And nothing says daring like seemingly random elements thrown together, which Slovenia does masterfully. The color green? Not in the Slovenian flag, so that's a great change of pace. The three little lookalike Stars of David in the middle of the jersey? Who knows what's going on the there. The wordmark "SLOVENIA" right across the front in the default font? Appropriate since no one would have known who the fuck these guys were otherwise. There's a funky little mountain range style going on with the bottom of the jersey complimented by white making for a snow topped look. Okay, really I have no fucking clue what is going on with these duds, but it's different. 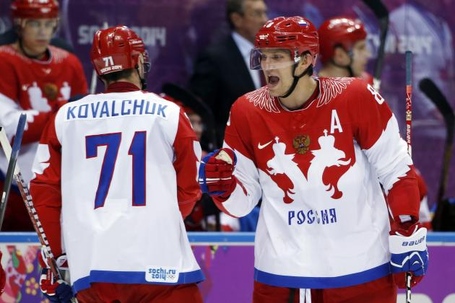 Despite the early exit, Russia looked fabulous in their uniforms. Nothing says intimidation like a two-headed dragon with a Christian apple on top of its head. The feathers on the shoulders gave Russia that extra douchey eastern European going out clubbing appearance that is all the rage right now. Plus, it didn't wind up looking like someone sneezed all over them. It was a Soviet inspired modernist view of medieval Russia. Otherwise known as "a cool looking clusterfuck".

The best of the best: Canada's thirds 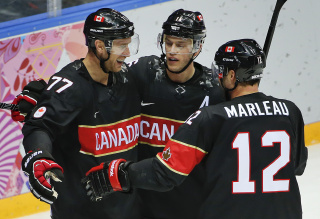 Nothing is more fashionable than 1930s Germany, and boy was there a lot of that going on here with Canada. But it wasn't just any 1930s German inspired set. No, this was a high ranking official 1930s set. Black is a sleek color. Red and white are Canada's colors. A great combo! The arm band finishes the uniform off for that final German accessory that was oh so important back in World War II. The maple leaf is even black with a white outline! All the colors mesh well, so much so I can overlook the dried semen shoulders. Way to go Canada. The Nazis were a lot of bad things, but fashion, boy did they do that well.

To no one's surprise, Patrick Roy was voted the biggest jerk out of Colorado. Today though has the Calgary Flames. The Flames are a bit of mess (understatement!) and have been kind of reduced to a team slightly resembling the Chiefs from Slap Shot. Here's who we got.

Remember when I wrote that post about how big of a douche he was, then he scored the game winning goal in that playoff game against the Kings? What a fucker.

I had a dream he would win this vote.

Prediction: Ugh, the Kings still look bad. I don't know, who cares? Fuck you. Fuck everything.