I like Jake Muzzin. I want Jake Muzzin to do well. At the start of the year, I advocated that Muzzin should be paired with Doughty. I felt if Muzzin played well with Doughty, it would be similar to the Keith-Seabrook pairing in Chicago. Muzzin obviously isn't as good as Seabrook, but he's a big guy with a big shot. I thought the rough spots in Muzzin's game would be ironed out some more.

It hasn't worked out great lately.

Maybe it is a birth defect with Muzzin, but his decision making is just fucking awful. Or it appears to be. Muzzin still can shoot the puck. But it's repeatedly into the shins of defenders lately. He can still throw huge hits. But he often finds himself out of position. Does John Stevens not coach him? Does he just hope Muzzin will figure it out on his own? The silver lining is it's not quite as bad as Jack Johnson. Okay, nothing will be as bad as Jack Johnson, what with his patented head-fake that fools no one, results in a turnover, and odd-man rush the other way. But Muzzin is struggling right now. For example...

That turnover...kinda bad luck with it getting picked out of the air. Not a great call in general, but a bad break. A cross of stupidity and crappy luck, let's say. Okay, yeah, it was an atrocious decision trying to go across the zone to clear and breakout when Claude freaking Giroux is right there. Then there was the defending (ugh). Again, Rudy did a much better job breaking all of this down with similar(ish) plays before. However, Muzzin found new levels of ineptitude. He originally had the play completely right. He had Wayne Simmonds covered like a racist police officer, but then for whatever reason totally ditches him. Yes, there was the pass to Vincent Lecavalier, but Quick came out to face him. And then so did Muzzin.

The fast puck movement may have confused Jake into thinking he was a goalie all of a sudden, or that he suddenly was seeing through Jonathan Quick's eyes, a la Being John Malkovich, but it quickly topped his bad pass in the "what the fuck are you doing?" department. Lecavalier had a pretty good chance to score already, but Quick is one of the better goalies in the league in lateral movement. He came out high to cut down more of the angle, which does leave the far side totally exposed if Lecavalier was to pass it. You know, the side Muzzin was supposed to (and was originally) covering. Instead Simmonds scores the easiest of his one hundred goals because Muzzin slides over to try and block the shot. In the process Justin Williams looks like an asshole for not covering anyone because Muzzin is trying to do three jobs at once. And no I don't mean blowing, sucking, and licking asses. Not like it matters since the Kings didn't score again.

I'm not saying Muzzin should be benched for this one play. Well, even though this has kind of been on repeat lately with him. But Christ on a bicycle, this sort of shit is making me rip my hair our. I'm surprised Darryl Sutter's face hasn't flipped inside out at this point. Maybe just less minutes for Jake. Maybe just not playing with Doughty for a while, and maybe with Matt Greene instead. So who goes to be paired with Doughty? Regehr? No. Alec Martinez? Sutter will never allow it. Go get Dan Girardi? I wish. The go-to option at this point is to slap Muzzin upside the head with a newspaper, say "ya big dummy!", and make sure he tries really, really hard not to do something like that again. Until tonight's game, inevitably.

Next time: Why everyone chasing the puck into the corner on the penalty kill was a bad idea.

For today's jerking we have the champion jerkers, the Chicago Blackhawks. The Blackhawks are a team with a lot of depth and talented jerks, and while I have my own personal choice, there are a lot of guys to chose from.

He comes across as that kid you knew in college who would be drunk at 7 AM, a loud abrasive asshole by 8, and trying to sexually harass your girlfriend by 9. Then he would act incredulous when people would threaten to kick his ass at 10. He also would wear florescent shirts featuring himself. Oh wait, that was Patrick Kane two years back.

There's pieces of shit on every team. Brad Marchand, Jamie Benn, David Backes, etc. Most of them I'd still like to have on a team because they have talent that makes up for that (seriously, Dustin, start scoring), but Shaw doesn't have enough that makes up for being a shit-bird. I'd hate him even if he was on the Kings. 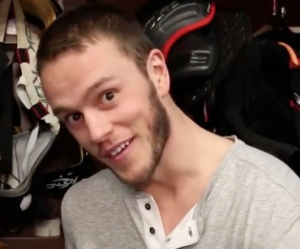 This asshole never gets back to me about when we are playing Mario Kart. What's wrong, Bryan? You a pussy or something?

Prediction: Goals by Kane, Toews, Bickell, Shaw and Muzzin (into his own net).