Don't act like you're better than Russia, Texas. We all know the truth.

Though there are a few games left before the break, it seems like most hockey fans are already looking ahead to the Olympics, which makes sense. I know I personally have had a hard time thinking about anything besides how every detail that comes out about the Olympics in Sochi seems like an ominous portent of doom.

Seriously, are we SURE we want to do this? Is it too late to cancel this whole Olympics thing? At this point it's like you planned your friend's birthday party and spent a lot of money on invitations and decorations and gifts but then you found out at the last minute that the restaurant you had in mind for the party burned down years ago and serves urine instead of water. I know you really wanted to have a fun party and everything but...maybe it isn't such a good idea.

But whatever, nobody ever listens to me, so this whole "Olympics" deal is probably going to happen. And if the journalists over there are doing their jobs correctly we'll probably be hearing a lot about Russia's horrible anti-gay laws. And those of us who live here in the United Good States of America can rightly feel morally superior for the comparatively enlightened way we do things over here.

But not you, Texas. You don't get to feel superior.

Man Texas, you're the worst. Just another embarrassment in the long string of embarrassments that make up the history of Texas.

Because Texas and Russia turn out to have so much in common, I've made this handy diagram to help you differentiate them: 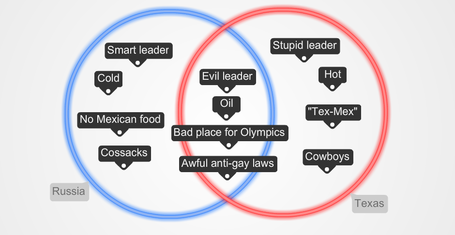 So the next time you find yourself in a place you don't recognize, please consult this chart. And if it seems likely that you are in either Texas or Russia please, for your own safety, immediately pick a direction and begin running and don't stop until you cross a border.

Video Gamery: My 25th-favorite video game is the Arkham Asylum series of Batman games. If you've played those games, let's talk about them in the comments!