Let's gear up for what the second season has in store

By the time this has posted, True Detective will have wrapped up its first season. In a great twist, the Yellow King will actually probably wind up being Dwight King no less, and we should have all seen it coming. HBO and the NHL have a long standing partnership after all, and a strong dose of reality with Dwight's murders was the perfect touch. 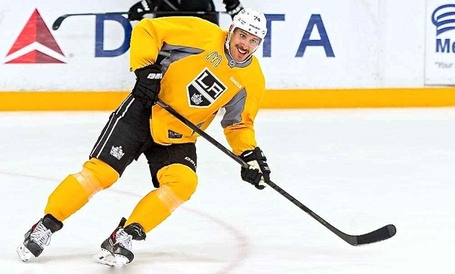 HBO has had a big problem with NHL 24/7 also, with many saying the show has lost its edge, so to have a cross over was a good way to keep everyone fresh. Which now leads us to what lies ahead for the NHL and True Detective. It's been no secret that the show was revamping itself entirely for a second season with a new cast and storyline. It's rumored that the show will now feature two women, but that's ridiculous! It's clearly a fake news story generated by HBO to disguise the all NHL cast they have on tap. Here's some possibilities:

The Ivy league nerd and the man who is a walking Petri dish of STDs and Lyme disease. It's a classic case of book smarts meets urban dictionary practitioner. One deduces clues, takes meticulous notes, and uses otherworldly brain power to track down a killer. Meanwhile his partner barks at people and urinates in public.

Both guys sit around looking incredibly awkward and uncomfortable. They don't leave their office ever until Marleau exclaims that he has some really sick pogs back at his house. The two of them then bike around town and get ice cream, laughing, yet never looking each other in the eye. There's not a mystery involved besides Marleau trying to figure out where he put his collection of pogs and Pokemon cards. Actually, this sounds more like this could be The Hardy Boys.

It's the Tea-Party versus a guy who is a real douchey fashionista. The whole season is shot in the style of a TMZ "news" clip. Arguments rage about taxation, stylish eye-wear, the right to bear arms, Barack Obama, and Perez Hilton. The two of them decide arguing is just silly, and kill each other instead. Special appearance by Martin Brodeur as a fat(ter) Perez Hilton.

Ott is a petulant jackass, going around pushing people's buttons. Jackman is there to always clean up his messes, albeit slowly. However, when Ott takes things to far, even Jackman can't believe it.

Okay, I just wanted to use these GIFs again, alright.

My bad. This has been done already back in 2012. The ratings weren't very good though.

Ryan Smyth won easily, as we all expected, for the Edmonton Oilers and it wasn't really a race. Wait. Nail Yakupov won? What the hell is wrong with you people? Alright, whatever. Even though the Flames are playing tonight, we already had voting done for Calgary, which Brian Burke won. So instead it is a very random appearance for the Tampa Bay Lightning. The Lightning are slightly more well known than the Carolina Hurricanes, who we had a little while back, but Tampa is another team we in California don't get to see much of due to geography. They don't appear much on national broadcasts either, and the only reason the Lightning are slightly more well known than some of their other southeastern brethren is because of Steven Stamkos. Today's candidates also features a player who is no longer on their team (you'll never guess who!), but really, really, really deserves a spot on the list of contenders. I just had to include him. Here we go.

I caught some flak, deservedly so, for not having Callahan included in the Rangers voting a while back. Oh, and look. It all worked out, as he now has a chance to make an appearance with Tampa. Callahan, like most Ryans, tends to be a real asshole. In this case, he whines and takes runs at players. He also holds out for more money, effectively holding his team hostage. You know, captain material.

You knew he had to be on this list. Yeah yeah yeah, the Rangers already had their voting, but boy does one of the most long time respected now turned villainous players in the league deserve a chance to shine. Upset presumably about being left off of the Canadian Olympic roster initially by his general manager (in favor of Chris Kunitz) St. Louis suddenly requested a trade from Tampa Bay, sort of hamstringing his team at the deadline and drawing ire from everyone. The Lightning are battling for a playoff spot in the east, and losing Stamkos' playmaker is a hell of a blow. Even with the return they got. Nice way to shit all over your legacy.

Prediction: Time is a flat circle, repeating itself. Flames win with a last minute goal after the Kings dominate yet fail to score.