There were a lot of shows in the 90s not worth watching. Ducks @ Kings.

As is tradition here at Battle of California whenever two teams from the best state in the union face off against each other, today's game posts have a theme behind them. Today's theme discusses the age-old question: Xena, or Dr. Quinn? Dunn will be discussing Xena in his post, I will be discussing Dr. Quinn below.

Although I have vague memories of my parents possibly watching Dr. Quinn, Medicine Woman when I was younger, I don't remember watching any of these episodes with them, and couldn't pick out a single second of the show from my memory.

It was only fitting, then, that I take the time to defend The Good Doctor against the savagery of Dunn and his views on Xena, Warrior Princess.

For some background research, i decided to find a random episode of the show to watch before I sat down to write this post, and to my shock I found that someone has uploaded the entire series of Dr. Quinn, Medicine Woman to YouTube. Who the fuck would do this? What kind of life is that?

Anyway, I decided on Season 2 episode that YouTube labeled Episode 2x20, but which Wikipedia tells me is actually 2x21 and describes as such:

Rev. Johnson recruits a new schoolteacher (Sherry Hursey) for the town, whom he appears to have romantic history with. All seems well when their flame is rekindled and she and Michaela hit it off as career women from the East. However, her beliefs about appropriate discipline come into question when students start coming to Dr. Mike with unusual injuries and Colleen and Brian admit that the injuries are from schoolroom discipline. The Reverend proposes and initially stands in the teacher's defense, but when Dr. Mike goes to Loren to call a town meeting to discuss her methods, and no one can agree, the Reverend has a discussion with her about it and learns that she doesn't even want children, which forces him to break off the engagement. Jake reveals to Loren his mother beat him with a strap. Though the town voted in support of her methods, she ends up leaving town when a harshly disciplined student retaliates and beats her up. When Brian can't sleep, Dr. Mike asks Brian to promise he will tell her if anyone ever hurts him.

If that sounds as exciting to you as it does to me, you can watch all 45 minutes of it here:

Okay, admittedly this is pretty awful. I mean, it's nice that we have shows like this to remind us not to beat children or whatever, but I suspect most child-abusers aren't watching Dr. Quinn.

Okay, this isn't helping my case at all, is it? Look, I'm sure if I watched an episode of Xena, it wouldn't be any better. I wouldn't know, because Xena is also a show I never watched.

Why did we agree to do this, Dunn?

Anyway, here are some reasons that Dr. Quinn is awesome and way better than Xena or any other similar unwatchable bullshit you want to throw at me...

The SB Nation preview widget thing still isn't working for BoC. But here are some details about the Anaheim Ducks game tonight against the Los Angeles Kings over this fucking image: 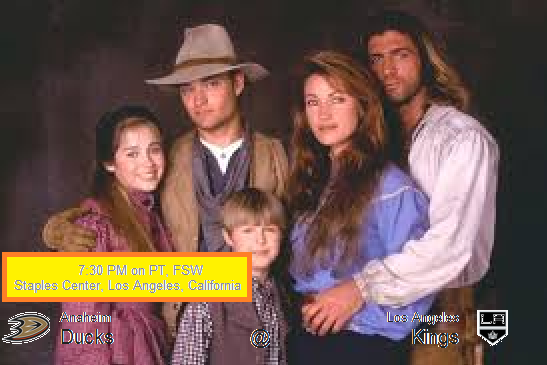 Dr. Quinn gets a Kickstarter campaign and meets its goal.