How to determine if a goal actually counts

Hopefully this will clear everything up for everyone.

Share All sharing options for: How to determine if a goal actually counts

There has been a lot of controversy in the NHL this season regarding some apparent goals that weren't counted and some things that looked like they shouldn't be goals being counted as goals. To set the record straight, I have obtained the official NHL rules regarding the goal review process.

Click the image to enlarge it, read and study the chart, and hopefully we'll never have any confusion ever again. 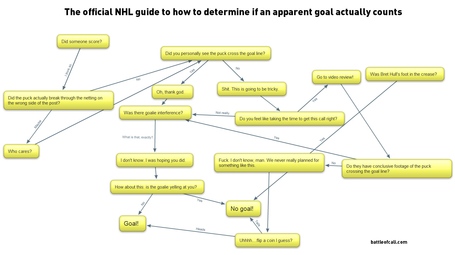 Prediction: The Sharks will score five apparent goals and will win 3-0.