Kings Gameday: About in Kazakhstan to talk let

REPORTING FROM MANAGEMENT OF KAZAKHSTAN TOURISM

Share All sharing options for: Kings Gameday: About in Kazakhstan to talk let

Hi everyone. Dunn here. Just thought I would give you a heads up and let you know that after extensive months of planning and negotiating, I worked out a deal with a sponsor for Battle of California. I'd figure I'd let them say a bit about themselves while I cash this check, so enjoy.

Greetings friends and companions! Your the journalist of taste, Mr. Get'r Dunn, has sell advertisement to us, on his website he owns, California Battle State. Made in exchange for seventeen dollars and asylum from the West. We hear our neighbours, Ukraine and Russia, try and sway your political ideology and asks money of you. In our environment, in Kazakhstan, here said none of this. We are here to extend only hand of friendship wished.

About inclined of wonderful Kazakhstan? You need to be! Here where we placed! 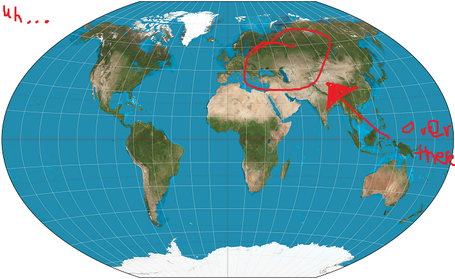 Fully look have on us, and much to do. Have you heard about Kyz kuu? Having a horse, it is a game, young adults play. A boy chases girl, both on horses, and with kisses possibility if the boy wins the race. And kisses with the horses possibility, too! That is a joke, because having a horse love mean you become enveloped with sin. If a girl wins, she beats the boy with a whip. Noble expense it is! Yes, true all, very real!

Feel not shy to observe the silos of military and the gas and pipelines of our territory. Many an oil sold to westerners like yourself, and you now can see where it began! Wilderness! Industry! Culture! Kazakhstan holds all qualities! Try the bountiful livestock meats and bread. Be sure to refresh with a cold, salty Ayran beverage.

Much athletes we us have as well. Hockey stars Evgeni Nabokov of San Jose is notable. He is not of Russia. He is ours. Do not dispute. It is fact. Perhaps you have noted of Konstantin Pushkarev? Also renowned! Ukraine offer only Alexi Ponikarovsky. Shit he is. Shit of pig. Ukraine sends you feces. Kazakhstan not of has! Athlete of proper sent America. We is friends and enjoy you the people very much, but no Russia and Ukraine only wish lie deceit and wrong native land of our.

So come and stop at Kazakhstan. We have great times with you! As Borat states, "It is nicely!"

In what was probably the most enthusiastic round of voting in a long time, Mike Smith was the easy winner for the Phoenix Coyotes. Shane Doan will have a chance in the wild card round though, which happen to start Monday(!) so be sure to vote. Since the Kings latest skid has caused my game previews to, um, digress, I should inform you that Kings play the Washington Capitals today. So we also get to vote for a few of them!.

When he isn't creepily hanging out in hospitals to inform you of FOMOH, Ovechkin enjoys seeing red lights flash. A lot. So much so that he spent the entirety of his life training making them go off by scoring goals. And allowing goals, too. People tend to hate him for both reasons. And because he reminds them of the bad guy in Rocky IV.

Way back in the day (remember 2012? Wow!) people got really pissed at Joel Ward. For scoring a goal. BIG MISTAKE, PAL. Ward kept up his terrible behavior of scoring goals and was sentenced to 40 minutes of being locked in a bathroom. I hope he learned his lesson.

Now Barry O has not actually been to a Capitals game apparently, but that doesn't excuse the President from this list. Half the country vehemently hates the guy, and there is a whole cable channel who finds reason to live in blasting him 24/7. They can't all be wrong, right? Right! He spies on foreign leaders and his own people alike, has killer flying robots, and I hear he has someone just waiting to kill your grandma. He also likes basketball more than hockey, which means every hockey fan ever has been personally insulted. Plus-hey, what's that whirring noise?

Prediction: The Capital Washingtons score with a count two goals while the Angeles of Los score one goals.