The 5 Funniest Hockey Tweets of the Weeks: World-Classy Edition

The Sharks are playing the Flames, but first: the 5 funniest hockey tweets of the past couple of weeks.

Share All sharing options for: The 5 Funniest Hockey Tweets of the Weeks: World-Classy Edition

This feature didn't appear last week due to a severe lack of funny from all of you, so here are the five funniest hockey-related tweets of the past two weeks:

Still 33 mins left in the 3rd but Sens will need to capitalize on the rare 5 on negative-1 PP to get back into it. pic.twitter.com/sQg6ZTX8XJ

Which entity functions more poorly: NHL GameCenter or the NHL itself?

On the next episode of "Canadian Hannibal" the team hunts a serial killer who slices people into very thin pieces and then freezes the slices into the ice at hockey rinks with his Zamboni.

@wingingitmotown We really cant worry or even give a flying V what the heck other teams are doing! We want to be world-classy fans,w/ honor

I'm breaking my rule about not including un-intentionally funny tweets here, but I think I made the right call. Holy cow, just look at all those words!

Corey Perry is like if you built a Frankenstein out of just dicks.

Prediction: Nobody calls me out for picking my own tweet as the funniest because it clearly was.

Video Gamery: My 10th-favorite video game is Minecraft. Here's a shark house I made once: 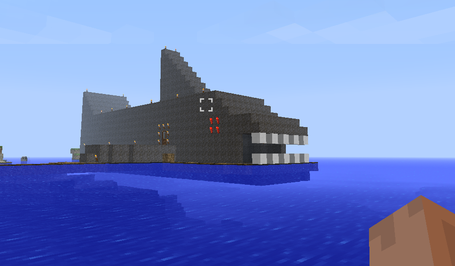