Kings Gameday: By the Grace of God

Share All sharing options for: Kings Gameday: By the Grace of God

Most of you I am assume follow me on Twitter. If not, get on it (@sharksgotmyleg). There are a few people I would say are my favorites on Twitter, but the latest, and possibly greatest, is Nancy Grace. Nancy is a "journalist"by title only really, though she used to be a lawyer (until she ran into some ethics problems). Her show meanwhile consists of quite a bit of sensationalism and exploiting some rather grotesque and disturbing crimes. The online presence she commands isn't too different with the exception of one thing: Her hash-tags.

They range from insane to "holy bat testicles this is crazy". For example:

Cops: a math teacher is caught teaching one of her underage students more than multiplication—she’s busted having sex w/ him! #SextAndSex

Were these parents encouraging their baby son to smoke pot with them!? #PotAndTots

Angry at her husband for watching NASCAR, a woman allegedly crashes her car into a church—then stabs her hubby on the altar! #StabbedAtAltar

So yeah, Nancy is crazier than an outhouse rat. But I appreciate her work, and guess what? Nancy is really into the NHL, too! She expresses her outrage over hockey games just like us. Just crazier than some of us. Heck it's been all she takes about lately. With the Kings recent string of goal controversies, Nancy was out doing the Lord's work as usual. Even with last night's game. 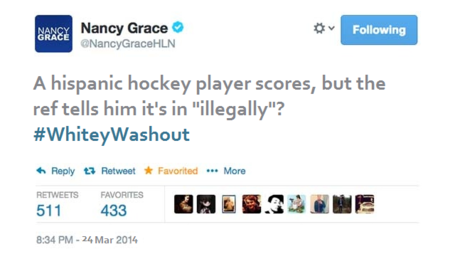 She also voiced her thoughts on that "oops yeah it was a goal, my bad" play with the Coyotes. 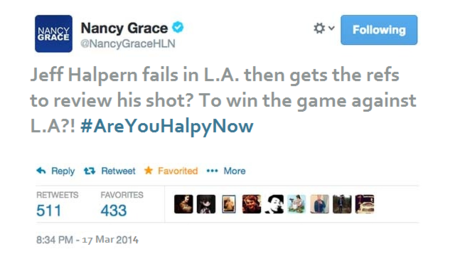 The Ducks/Kings game a little while back? Nancy was not happy with that one either, and she sure wasn't going to let that game slide by without bring attention to the glaring problems. 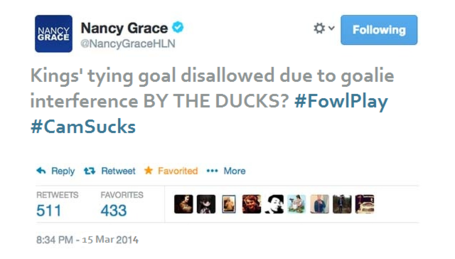 Agreed, Nancy. Agreed. But don't start thinking she plays favorites with the Kings. No, and one of Nancy's strongest passions is finding those who have been walked all over and abandoned, then fighting for them in an attempt to give them peace. She's been investigating the Sharks goal controversies all year also. 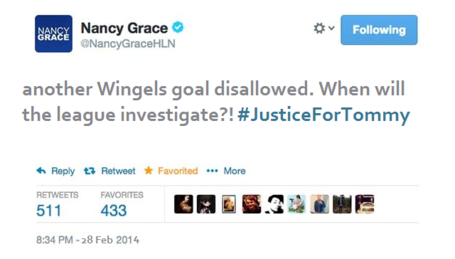 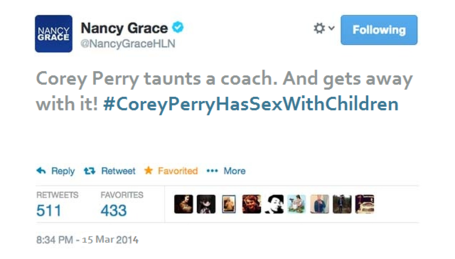 Er, well, uh maybe her hash-tags get a bid too real. The NHL isn't the only subject that catches Nancy's ire either. The Olympics were a busy time for her, though she was the only one looking into the gritty stories everyone else tried to ignore. 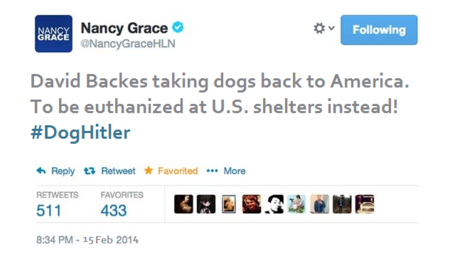 Spread the word, folks. And of course she is always on top of the biggest legal cases featuring terrifying figures. In fact, she has been looking into a favorite here at the Battle of California. 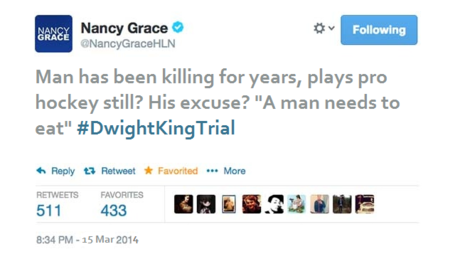 Through it all though, Nancy Grace really is one of us. She's just another gal, another fan. She just does her best to make sure the most important stories reach us. She's a real hero. 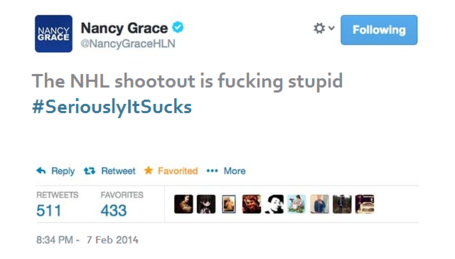 Today features the second half of the wild card round, and the same rules apply. Six presented, three move on. Here's who we got.

In a league full of whiners and self-entitled nobs, Doan may be the nobbiest. It's the over flowing belief in that he and his team are incapable of wrong doing that is so impressive in Doan's jerkness. But the hypocritical behavior he exhibits is what launches Shane into the stratosphere of being a jackass, as he has taken shots at players after complaining to anyone who would listen about someone else taking a shot at him or a teammate. Remarkable work. Doan fell short against Mike Smith a little while back.

Callahan is a bit of an odd choice to be in the voting this late into the process, as I didn't even include him with the New York Rangers on the first go around. That got people pissed at me (which is preposterous) for excluding Callahan, so I added Callahan to the Lightning's voting when he was traded. Where he finished second to Martin St. Louis. Callahan is sort of like Doan-lite. The attributes are similar, but he hasn't built as grand a career on asshatery.

There is is no active player with the rap sheet like Raffi. It is almost impressive considering the guy is not that old. He is a head shot connoisseur. An artist at concussing. Hell, even off the rink he is causing headaches. Notably for the PR department of his teams because he is cool with wearing black face. It's almost beautiful. 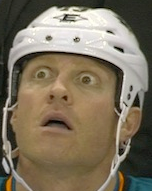 Almost. Torres lost in the prelims to someone named Megalodon.

Jerk goalie, jerk coach. He's loud, violent, and just rather unpleasant. Worst of all, he failed to fight Corey Perry when Perry made fun of him. For that reason alone he'd earn my vote. Roy failed to advance, losing out to Semyon Varlalalalalamov.

He dives. He bites. He cries. He fights. Even Anze Kopitar wanted to rip Burrows' head off. Teams are going to have pests, it's known. Burrows though is a full fledged rat, through and through. When the Canucks are finally completely gutted of their current core of players, the one guy remaining will be Burrows. Without a doubt. He is Vancouver's lasting identity. He shockingly fell short in the earlier round to Kevin Bieksa.

Bad analyst, terrible GM, fat human. Oh, and he beats up kids. For some inexplicable reason, NBC hires the worst people possible for NHL coverage. Maybe the options for them are just that bad. Maybe they just are sadists. Whatever the reasoning, Mike Milbury has carved himself out another career that he really sucks as. It's pretty evident that occasionally he has to take the unfavorable side in a debate (to fit the sport media model of two people yelling about stuff even if they are in agreement off camera but so that you have some argument to be televised), but he is a less likable Don Cherry. He wasn't up for a vote earlier.