What the ass-shit is happening? Canadiens @ Ducks.

I'm writing this post on Tuesday night, after it already became apparent that NHL general managers have lost their fucking minds, but before we know just how far it's going to go. And tomorrow, which is today for you, there's still even more time for GMs to fuck everything up.

I don't know what's happened since I've started writing this, but it's safe to assume that whatever it is that happened is totally fucked up. The only reasonable explanation is that the GMs read Megalodon's article from last year condemning the trade deadline as "boring," had their feelings hurt, and colluded to be reactionary and unrestrained by reason this year.

Here's some of what's already gone down, mostly on Trade Deadline Eve: 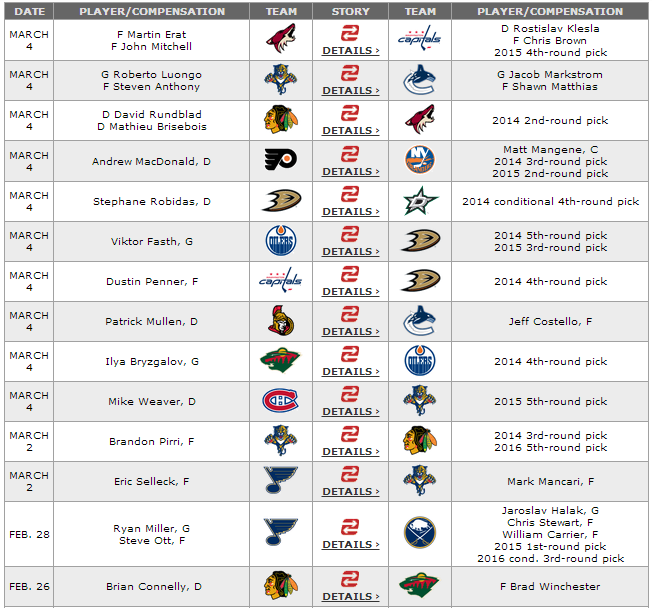 There's a lot of notable trades on there, many of them hilarious.

Not sure why #Canucks fans are so upset. Sure, you lost Luongo, but at least you still have Cory Schneider...

As a Ducks fan, I was a little surprised to see Viktor Fasth go, but it's not exactly shocking. Our depth in goal is promising. I was pretty certain that Hiller would be the one to go this season, and it's likely that was the plan until Fasth got injured.

I didn't like the Dustin Penner acquisition coming in to this season, but his play changed my mind. I like the guy. He became a little inconsistent towards his final days in Anaheim, but I suspect there's more to this story. Penner had a lot of unexplained healthy scratches. Trading him essentially for Stephane Robidas doesn't seem like too insane of a return, though Playoff Penner would have been nice to have in the post season.

Every time the Ducks do any kind of moves it always seems like there's more coming, that pieces are being moved around to make way for a larger deal. The rumors are certainly out there this time around, and it might be the case, but we've been wrong about that every season now for years. I wouldn't be shocked if this is it. Having said that, by the time you read this I'm probably already wrong.

The SB Nation preview widget thing still isn't working for BoC. But here are some details about the Anaheim Ducks game tonight against the Montreal Canadiens over an image of a dude puking: