Kings Gameday: There Will Be Blood

Based on Upton Sinclair's "Ryan Smyth is a Total Wiener"

Share All sharing options for: Kings Gameday: There Will Be Blood

Since last we saw the Oilers, they were an ever so slightly better team (on paper) than they are now. A lot of that has to do with the trade deadline passing and the Oilers dumping players for picks left and right. Except for trading for Victor Fasth. Now they are the team anchored in net by the castoff backup netminders from southern California. Nick Schultz and Ales Hemsky got traded, Corey Potter got picked up by the Bruins (why), and Ryan Smyth's corpse is getting rather mushy. All signs point to another early draft pick, which can be added to the pile of players that the Oilers possess yet can do nothing with.

The Kings meanwhile got Marian Gaborik and this is a perfect setting for him to make an impact for the Kings. A team with lousy defense and plays a wide open style? Sounds good to me. Plus, I can reuse this gem. 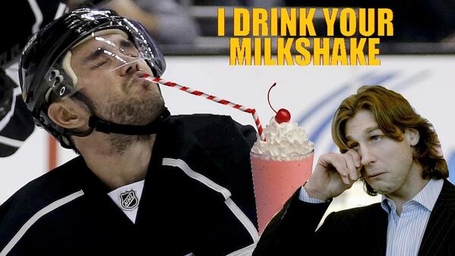 So yeah the Kings can't score and lose. Shutout by Scrivens.

Another game, another black player winning a vote. This time it was Evander Kane for the Winnipeg Jets, on the heels of P.K. Subban winning for the Montreal Canadiens. You guys sure some racist fucks. And wouldn't you know it, today's team, the Edmonton Oilers, has a black guy on it. However, I'm not giving you bigots the chance, and Mark Fraser will not be featured.

Little Cindy Boo Hoo cried for three fucking hours after finding out he made this list (side note: The girl who played Cindy Lou Who is now in a metal rock band and, um, yeah).

Young Mr. Not-Nick-No-Not-Jeff-Either Schultz refused to play for the Ducks and chose the Oilers as the team he wanted to play for. It was really actually pretty hilarious for everyone.

Showboat. Enigma. Russian. Everything that is wrong with the NHL essentially.

Featured once before back when he was a member of the Kings, Ben left and has since been getting peppered with shots every day. Not before viciously attacking people online with an insane tirade because they were giving his wife shit, though. What a jerk. Ben Scrivens is an epitome of a bully.

Prediction: I already gave you a prediction.