How to: Fix the Edmonton Oilers

Greetings again, class. Last semester, I introduced you to overhauling a franchise. In that case the franchise was in a huge, non-traditional market that had plenty of tools to work with but had been struggling. Today, we start our seven part series, "Correcting Canada". Specifically, we will work with a franchise that was a juggernaut many years ago, and now experiences utter failure. They are a Podunk town with a diehard base of fans. Any ideas? I said it in the header, you fucking idiot. It's the Edmonton Oilers! Here is what we are working with:

Or lack thereof! Ohoho, you can write that one down. The Oilers have a lot of young players. Most of them are fast and have good hands. They don't know what defense is. They have a few old guys, too. They are slow, and suck pretty much. One of them is a big wiener and cries a lot. More on what to do with him later. Now, despite having many young hot shots, the Oilers maybe have a few too many. TRADE THEM! Well, one. Maybe two. Say bye to Nail Yakupov, at the very least. Preferably to L.A. In return the Oilers can get superstar big boys, Cup winners, Jordan Nolan and Kyle Clifford! Yes, this a great trade and the Oilers should definitely do that. It'll make the sting of losing Ryan Jones bearable.

Up next, ditch that Ryan Nuget-Chocolate guy. A number one center is necessary, plus you guys need some defense. You can get both from L.A. out of Mike Richards and Robyn Regehr! You'll probably need to retain half of Ryan Nutter-Butter's contract though. You know. For it to be fair.

You may have noticed you need a right winger. Good call. Spend lots of money on a huge deal for the biggest guy out there. No one may still want to play for you though, so don't get picky with who bites. But again, make sure you make a big move. And no one is bigger than Mike Rupp! He's 6'5 and weighs 235 pounds, so bam, there's your size! He's a veteran player who has scored 13 goals in a season before. That would put him at fifth amongst Oilers' forwards this season. See? Top six material. Also, give your first round pick to the Kings. Always keep the competition guessing. Lastly, pluck Blair Jones away from Calgary. Just to piss them off. They will never forgive you.

Canada is all about protecting your brand according to old white sports guys. They are also all about character, which with my plan you got plenty of now. So for your branding, you guys look like dorks. No one is intimidated by you. You're wonderful history nobody ever talks about anymore. Easy solution! Honor your history and scare the shit out of everyone by simply killing Ryan Smyth in a public forum. I'd recommend the guillotine, because it is imperative to part two. Put his head on a spike in front of your arena. Dip it in tar to make sure it stays preserved. It will look like oil, too.

Now for your jerseys. Blue and orange has nothing to do with Edmonton or oiling. The Islanders wear that. Go with a scheme that more represents you and is worn by winners. Oil is black. Edmonton gets lots of snow, which is white. See where this headed? I guess you could leave some orange just to change things up. Finally, slap a cool new logo on there so people can immediately think of oil. Heck, I can even think of a sponsor that is a perfect fit. Might as well throw on a appropriate patch. 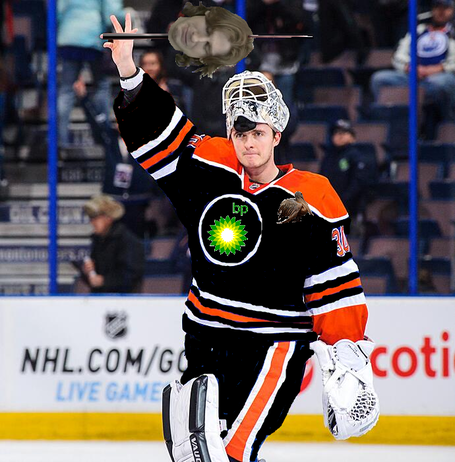 Now you got plenty of room to spend on contract extensions, or just to spend on gasoline to dose yourself in before you accept your fate in a fiery statement to the rest of the league.

The back half of the semi-final round. The last two spots before the big one. As a heads up, the final round of voting will be taking place MONDAY right before the playoffs. But anyways, here's the final six from the semis. It features quite a bit of representation of California. Also, MORE HAIKU POETRY!

He will fire me,

I SAW HIM BACK IN JUNIORS,

GO HAVE FUN OUT THERE.

How did he get here?

He is just one sneaky pest,

Patented "The Head Shot of Death",

Claims it is a dive,

Prediction: Someone complains about the Oilers' patch.