I chat with with Nick Moroch, the guy who used to bang on the glass at every Dallas Stars home game. Stars @ Ducks Game Two.

Share All sharing options for: Ducks Playoffs: #BANG - An Interview with the Dallas Stars Glass-Banging Guy

You might recall an article I wrote a few months back about a fellow named Nick Moroch, a fan of the Dallas Stars. At the time, I referred to Moroch as "The Most Obnoxious Fan in the World Banging on the Glass During Every Fucking Stars Home Game.™" Not too long after I posted the piece, Nick contacted me on Twitter, and was good-natured about it all despite the tone of the article.

One of the first things I did after learning that the Ducks would be meeting Dallas in the first round of the Stanley Cup Playoffs was contact Moroch to request an interview, which he graciously accepted.

When I touched on your glass-banging situation back in February, it was only rumored that you had been asked by the organization to stop. Since then, it has been confirmed that this was in fact the case. I didn't keep up with all of this, and being that this is a California-centric blog, I doubt many of my readers did either. Can you take us through what this situation looked like, who approached you, and how it was handled? 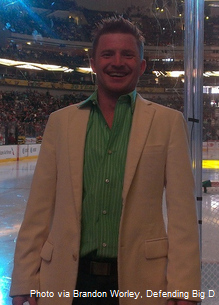 Honestly, the whole situation literally BLEW UP in my face for some reason, mid-season! The Stars did however, make several attempts, asking me to tone it down a notch or two. I thought I was doing just that. I received an email from the VP of STH (Season Ticket Holder) sales, and he explained in the email that due to "repeated negligence" I was to immediately stop banging on the glass, or immediate preventive action would have to be taken into effect (i.e. kicked out of arena, suspended, seat relocation, or even dismissal from being a glass seat STH). The President of the Stars and exec producer of FSSW were also CC'd in the email. The Stars President sent a follow-up email explaining the severity of the situation, that Fox Sports was the main complainant. A few days later from receiving the email, I met the Exec Producer of FSSW, who explained to me that he was getting complaints from not only Ralph and Razor (our two EMMY-WINNING broadcasters), but also from Fox Sports, saying that I cause "bad broadcasts". I tried to explain to him that all of this could have been avoided if they just removed the camera and microphone that is right above my head, maybe hang it from the rafters?

In the end, everything was handled pretty professionally, and no one lost their head (meaning me)! They further explained that this was an "open door" discussion and that they just wanted to see that I was able to restrain myself from banging on the glass. #futureglassbangingisinevitable

Has anything changed since then? Are you allowed to bang on the glass again, or are you still fighting the, er, good fight?

Honestly, it was pretty tough the first few games! I finally utilized my creative spirit and created a "#BANG" movement, with my #BANG sign, which has drawn pretty well within the Stars' fan base. I'm trying to let the organization know that even though I'm not allowed to "bang on the glass", I'm still going to be a passionate fan. The players, coaches and fans that regularly attend/watch games appreciate and love my passion for the team.

Let me clarify one specific thing: I was told that I was/am the ONLY PERSON in the entire arena that couldn't bang on the glass! Everyone else could do so as they pleased.

That's when I realized that the person I bring was able to bang on the glass. So, whenever I bring someone, I always encourage that person to bang on the glass (within reason...don't need to start any wars with the organization during the playoffs)!

Why is this important to you? What does the glass-banging mean to you?

My family have been STH since the Stars moved to Texas, and we took up the idea that glass-banging is (or was...?) a part of what fans do when there is action in your area.

You feel like you're apart of the game and that you could honestly make a difference in it if you just tried to distract the opponent for a second, maybe get him thinking about you, instead of what he is going to do with the puck. Some of the times it works, other times you look like an idiot. Who cares! You're just trying to have a fun and entertaining experience watching some hockey! The bottom line is that the game gets a whole lot more interesting when the puck is in your area...what would you to do? If you're a passionate hockey fan like I am, then you would probably bang some glass.

Have you ever gotten any indication from Stars players as to what they think of your antics? A nod from the ice, perhaps?

I'm friends with a couple of the players, but I've met all of them. They are real nice guys, very down to earth and engaging (especially when they have a few beers in them....haha). Everyone in the organization knows who I am and appreciates my passion for the hockey club, regardless if I'm able to bang on the glass or not. I do have a ritual where I'm always in my seat with around 2 minutes to go in the 1st intermission, where the players come down to the ice and skate before sitting on the bench. All of them give me either a nod or tap their stick on the glass which is really cool!

My family have been season ticket holders since the Stars moved to Texas, and we took up the idea that glass-banging is a part of what fans do when there is action in your area.
I've read that even among the Stars fan base itself, you can be a little polarizing. Have you gotten much grief from your peers? In person, or just online?

I am a bit polarizing! Most fans have embraced me as a part of the "in-game" experience, which is kinda cool! I take pictures with random fans who share my passion for the team, I even signed an autograph for a cute little girl! Honestly, some people in the stands do complain, but most of them don't come to games on a regular basis, and the people that normally do, inform that person of who I am! I also get "twitter complaints" from people that search #BANG on twitter, which is fun. Most of them just troll on me because they feel like they can. I'll usually try to reply to everyone on twitter whether it's bad or good, but most of it is good...haha!

You were a good sport about the article I wrote, and you took it well. This is surprising, given the reaction Battle of California usually receives when we lampoon a fanbase. In that spirit, go ahead and say whatever horrible things you'd like to say about me and get out any aggression you might have felt briefly (or not so briefly) before you turned the other cheek and took the article in stride.

First off, that article was an absolute beaut! Loved it! Love your passion for the sport of hockey and the 3 teams in California...I wish the state of Texas would get off their asses and put teams here so we could generate up a rivalry.

What are your thoughts on how this Ducks/Stars series is going to shake out? You're essentially back in the Pacific Division for playoff purposes, how does it feel to be stuck with us again?

Honestly, I think it could go 6 games. Depending on how the goalies do could determine a series real quick. Our top 2 cancels out your top 2 and I believe the series will come down to a few bottom 6 forwards....

In the end, what I do is not about me, It's about my team...the Dallas Stars.

Thanks for anwering my questions, Nick! Now keep it down over there.