Getzlaf is turning into a monster right before our very eyes. Ducks @ Stars Game Three.

No more beauty pageants for the Captain Duck pic.twitter.com/Xj0LH4g8Pg

Which was followed up with this reply:

So I made an animated GIF to test this Goonies theory, and well...

It holds up, guys.

Speaking of monsters, check out the two goals that Getzlaf has scored so far this series...

Getzlaf also had an assist in each game, and is now a two-point-a-game playoff force.

Pretty impressive for such a weird looking freak.

It sure is nice to go in to Dallas with a 2-game series lead.

Now if we can just find a way around taking all of these dumb penalties, we should be all set.

Oh, and, uh, we might actually want to try to control the puck at some point, too. Just a suggestion... 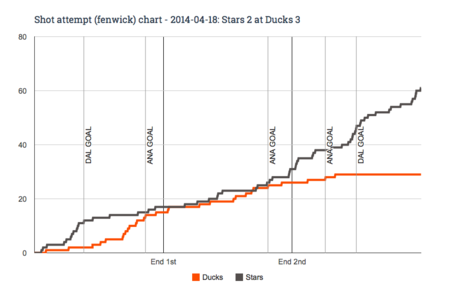 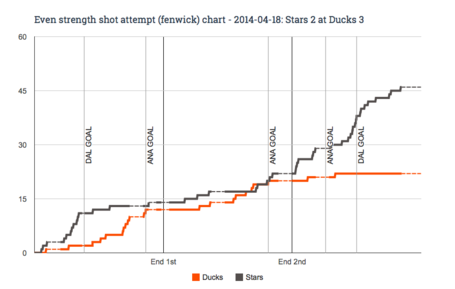 (I stole both these charts from Kid Ish's Anaheim Calling post)

On to Dallas. Try to spot Glass-Banging Guy.

Ducks are too distracted by Glass-Banging Guy to pull this one off.