The best thing you ever did on Star Trek was leave it.

There's a good chance you don't follow the official LA Kings twitter account. Maybe you aren't a fan of that team, maybe you're very selective about which accounts you follow, or maybe you just don't enjoy rape jokes. For whatever reason, many of you may have missed the "fun" that went down during game three on the LA Kings twittter.

While the Kings were being thoroughly dominated by the Sharks on the ice, the team gave control of their twitter account over to the Kings' biggest celebrity fan: Wil Wheaton, formerly of Star Trek and more recently of a bunch of stuff you haven't heard of.

Mr. Wheaton, no doubt driven to extreme anger and frustration as he watched his favorite team embarrassed on home ice, began to unleash some truly hateful and hurtful tweets. I'll share some of them here, but I'd like to take a moment to warn the more sensitive out there that these tweets are EXTREMELY offensive:

The view from up here in the press box reminds me of the old Wayne Gretzky Hockey on Amiga.-W2

Fun fact: when you’ve played Rock Band as much as I me, and Steven Tyler sits in front of you, "Last Child" sets up shop in your head. -W2

Signs of choking include: bulging eyes and veins, red face, being the San Jose Sharks in the playoffs. <3 -W2

And now, a fun fact for all the Sharks fans out there: we make our ice here at Staples using water we get from you! Thanks! -W2

IMPORTANT MINIGAME UPDATE: The Sharks are winning the "take most penalties in a row" contest by a longshot. -@wilw

It's pretty much a given that the Sharks are going to win this series now, which obviously pleases me but, far more importantly, will make Wil Wheaton sad.

To celebrate the LA Kings' pending elimination from the playoffs and the pending sadness of Wil Wheaton, I present....

Hah, what a dork! I only like three of those things!

#4 "Wil is a life-long fan of the Los Angeles Dodgers baseball team, and he is also an avid player of video games, which lead to his voice-over role in Grand Theft Auto: San Andreas (2004)."

Which "lead" to his role? Try to proofread a bit more closely next time you're updating your IMDB page, Wil!

#3 "Was one of the first bloggers and is an avid, active homebrewer."

Hahaha a "blogger" what a total loser! I bet he lives in his mom's basement too!

Wil was ten spots behind Michael Fishman, who played DJ on Roseanne.

#1 "He is an active member of the Propeller social news site, where he is a Scout."

I don't really know what this is, but I'm pretty sure it's laughable. 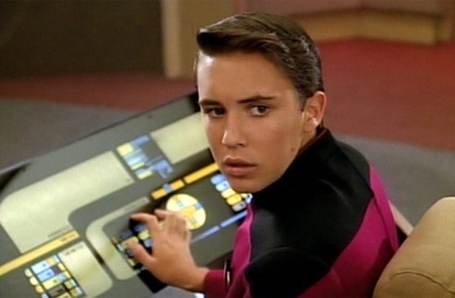 Prediction: Sharks win! Sweep! I am happy and Wil Wheaton is sad!