This is the worst kind of deja vu.

I don't know if I can do this again.

I'm having a hard time finding the right words here. I've already done three straight posts about the Sharks trying to eliminate the Kings. I've gotten hyped up for each game, only to have my heart ripped from my chest over and over again. I don't have much strength left.

Now, of course, there's the danger that this could be the final game of the year for the Sharks. A week ago this scenario was unthinkable, but now it's a reality. The Sharks have lost three games in a row against the Kings and now they come back to San Jose and need to win in order to move on.

My stomach hurts. I'm binging and purging on hockey news and analysis. I know I'm going to hate reading these cliche'-ridden, hyperbole-laden articles filling the hockey Internet right now, but I can't stop myself.

I'm starting to sweat. My vision is fading. There's a persistent tingling in my chest.

Oh - what's this? A package arrived for me, right in the middle of putting together my article down here at BoC Headquarters!

This is highly irregular. Normally I would never let something like this interrupt my writing, but since this day is already so crazy, what could it hurt?

Maybe it will be a bomb, and opening it will kill me. That would be...bad?

Why look at that! It's my pet cat Chandler, here to help me write this post! 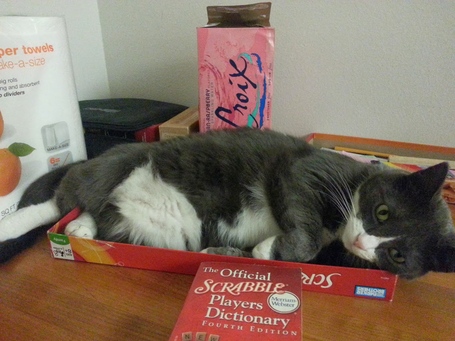 Wow, this is great!

Come on out of that box, Chandler. It's so good to see you! 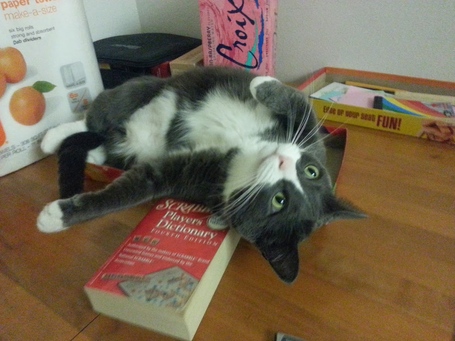 So here's the plan - I'm just going to continue writing the article I was going to write before you arrived, and you'll help me by acting out what I write in interesting ways. Sound good?

Great, I'm glad you agree! Let's do this.

After the Sharks' performance in game 6 on Monday, fans were left feeling pretty depressed. 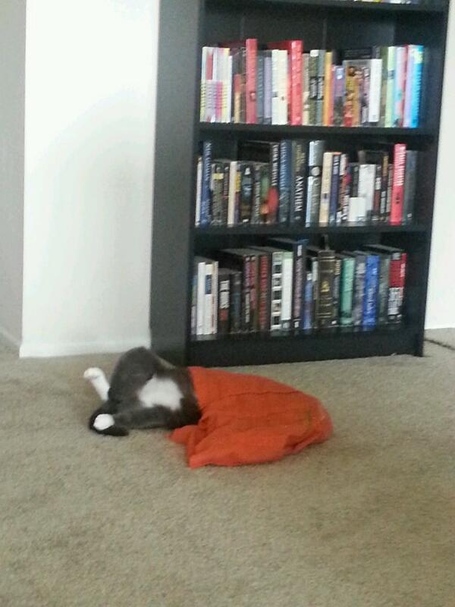 At times like this, it's only natural to feel trapped in a frightening world you can't control. 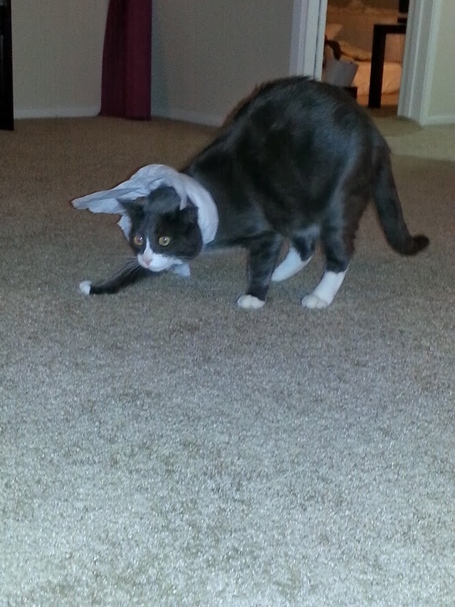 To deal with the stress, some fans turn to overeating.

While others look for comfort in distractions. 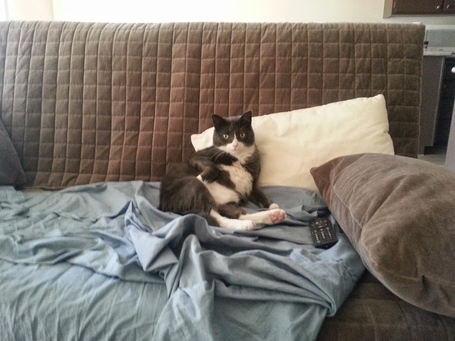 And some people find it's hard to even get out of bed. 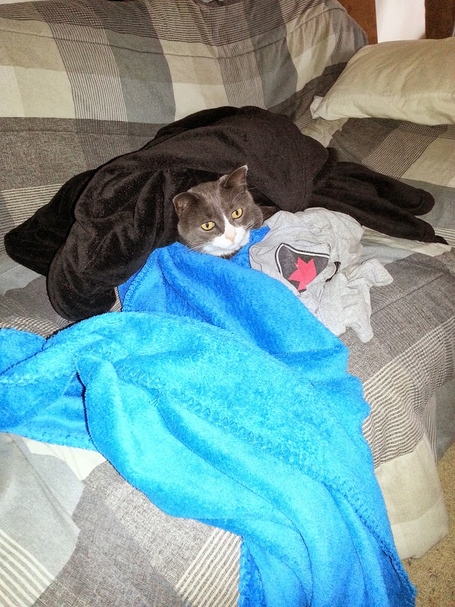 As for the Sharks themselves, this is gut-check time.

This is the biggest game in recent Sharks' history and, fairly or not, their performance tonight will go a long way towards defining them in the minds of hockey fans and the sports media.

The Sharks are feeling the pressure. 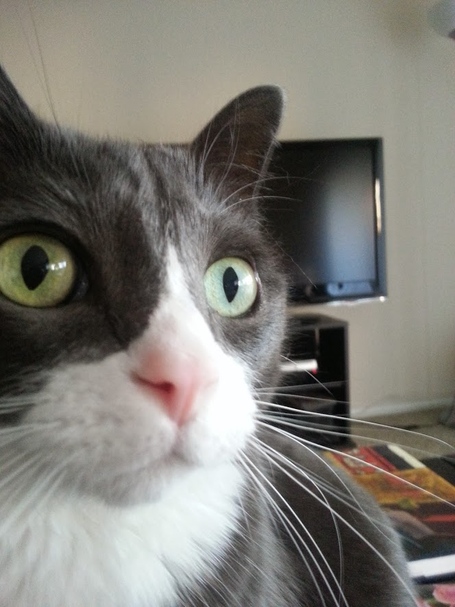 They can't afford to get distracted. 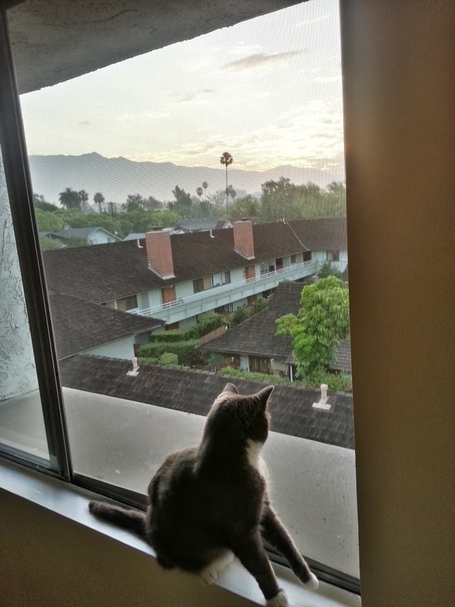 They need to make sure to focus on the rewards success will bring. 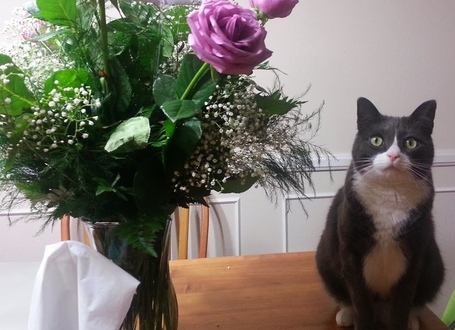 And make sure to get plenty of rest. 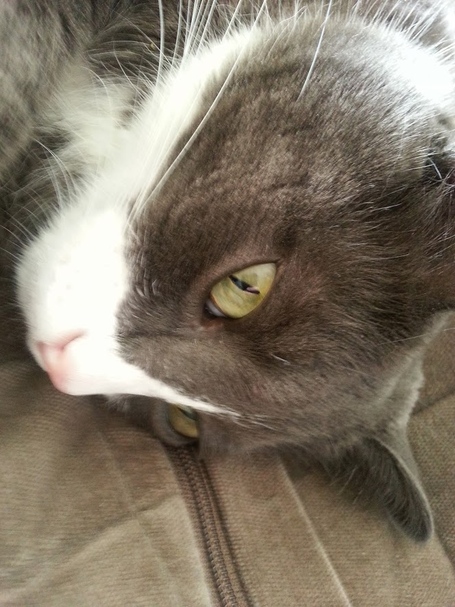 Thanks for all your help, Chandler. You did a great job. 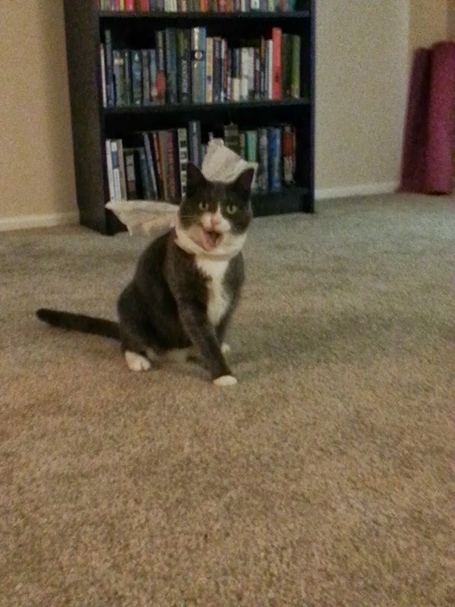 Yeah, you can go now.

If the Sharks lose tonight, they'll get into the history books in one of the worst possible ways. They'll join the very small list of teams to ever be up 3-0 in a series and then lose. It will be a total disaster.

But so what? Is that really so bad, in the grand scheme of things? Chandler won't care who wins or loses, that's for sure. All he wants is some yarn and some food, and he's a happy guy. Even if the Sharks lose, won't I be able to find some small amount of solace in the sight of my cat losing his mind with joy while playing with a toy, or sleeping peacefully, ignorant of the ultimately meaningless troubles that plague me? Won't that help me feel better?

It still won't, three years later. Nothing has changed.

Prediction: I'm either going to die smiling and drowning in buckets of champagne or I'm going to drag a rusty straight razor across my throat. Either way, it's going to leave a mess.