Here we are. Whether the Kings win or lose, this has been an...interesting series. But there's been one big  takeaway from this whole thing.

Thanks to, well, it says on the image

The Sharks complaining about knees now no longer have a leg to stand on. Because Joe Thornton kneed them. Poor Dustin Brown though was able to battle through it, unlike that wiener, Tomas Hertl. Surely, this will forever tarnish Thornton's reputation and he will be known as a dirty player throughout the league. Why he is the captain of the San Jose Sharks is a total mystery to me, but are we really surprised? They are in fact the team that employs some of the dirtiest players in the league. Raffi Torres, Mike Brown, Brent Burns, Dan Boyle. Just to name a few.

And Dustin just laughed it off. He said he knew Thornton didn't mean to try and injure him in a way that could have potentially ended his career, and instead absolved him of his crimes. Brown just said it was part of the game, but anyone who doesn't cheer for a  Torres leaping check knows that was clearly the type of play the NHL has been working diligently to remove. Each year, thugs like Thornton are gradually losing their roster spot to more deserving players. He is a guy with a record of receiving extra discipline, has been ejected from games numerous times, and has eclipsed the one hundred penalty minute mark in a season on three separate occasions. It's almost a good thing that play happened so now everyone can see what type of style of play Thornton chooses to use.

But the Sharks weren't done. No, after trying to ruin little Dusty Brown's career by severing his ACL, the Sharks twisted Saint Dustous of Ithaca's words into a controversy. Claims developed that Big Buddy Brown was being rude and classless to the man who had attempted to kill him. Of course, Dustin didn't do that! He defended Thornton! If that doesn't scream "Pope behavior" I don't know what does. He forgave a terrible sinner, whose transgressions were directly targeted at him. 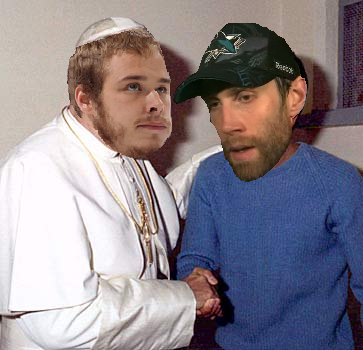 Despite all the attempts on Dustin Brown's career, every cheap shot he took, slanderous story written, and bit of trash talk thrown his way, he persevered. It's no wonder he is up for the Mark Messier Leadership Award. Toews is always up for the damn thing, and while Getzlaf has done tremendous work for the "Gigantic Bald Dickhead" community, Dustin's efforts to achieve peace and love are second to none. And now he has led his team back from the brink. From being down 3-0 in a series on the verge of being swept, to pulling off one of the greatest reversals in history. No matter the outcome, Dustin Brown has proven why he is one of the most beloved figures in the National Hockey League. I know we are all proud of him and the rest of the Los Angeles Kings. To make an entertaining series after those first three games...you can hardly ask for more. So forgive Sharks fans if they seem edgy or irritable. Or if they don't seem to recognize the heroics and charity of Dustin Brown. They seem like they are in a really dark, rough patch right now anyways. Poor guys.

Prediction: I demolish a twelve pack. For the Pope.