Nothing to worry about

Everything's cool. There's not a problem. None. No. 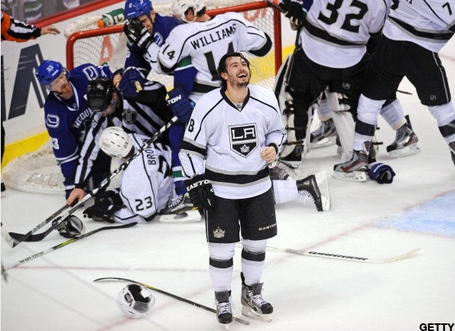 Everything is going to be just fine.

Today is the last round of the quarterfinals, and features a beloved Canuck and that dumb dick who yells between the benches on TV. However, this is as tight a group in jerkness we have had through this round, in my opinion at least. Here's the options

He breaks a guy's neck and he keeps playing. I break a coworker's stapler accidentally and all of a sudden I'm required to have a written apology, sit down with the CEO's to explain what happened, and wear a sign that says "I drop staplers".

He's done nothing to counteract the stereotype of Frenchies being total crybabies. This is how Don Cherry wins, Marty. Think on that.

Mirtle has made claims of returning to power here at the Battle of California, so I for one welcome our new overlord of darkness.

"BOY AND LET ME TELL YOU HOW MUCH FUN THIS GUY IS HAVING OUT THERE. I SPOKE WITH HIS JUNIOR COACH AND HE SAYS HE LOVES THE GAME. ABSOLUTELY LOVES IT. CAN'T SAY ENOUGH POSITIVE THINGS ABOUT THIS KID. [Giggles uncontrollably for the next thirty seconds]"