I never forget a dick.

Back on October 3rd of 2013, for my first gameday post of this season, I introduced you all to my friend Chris the Curmudgeon.

To refresh your memories, Chris was a fan of the Vancouver Canucks who took exception to some of the points I made in a guest post I wrote for Pass it to Bulis. In that guest post I previewed Vancouver's season and argued that they were totally doomed, because their new division was going to be way too hard for them and the Sedins would continue to decline thanks to a combination of increasing age and better competition.

I included this chart: 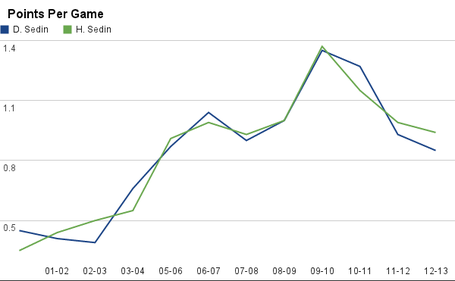 Chris disagreed with my predictions and my chart, and used a whole bunch of words to do it:

The Sedins aren’t in decline, their points per game has been remarkably consistent over the last 8 years, with the exception of 2 years playing with Christian Ehrhoff. Their even strength points were the same, but their power play points spiked dramatically accounting for almost all of the increase. Moral of the story? A power play QB is really really important (ahem*Gillis are you reading?)

The Sedins have each consistently put up between 0.85 and 1.0 points per game every season since the first lockout. The exception is the two years they played with Christian Ehrhoff (who scored 94 points over 2 years with the team, almost exclusively with the twins), when those numbers spiked considerably. Since Ehrhoff has left, they are back along the same line as they were before. In other words, where you want to draw a downward sloping line through 3 or 4 data points, I want to draw a flat line through 8 data points with two outliers caused by a easily identifiable confounding variable. I’ve never tried to suggest the Sedins are still going to improve, just that the reports of their decline are somewhat overstated. Catch my drift?

I interpret trends on graphs for a living. Yours can be interpreted several ways. Say whatever you like about the Sedin twins, I would LOVE for the team you follow to underestimate them as you have.

As long as Dr. Curmudgeon is wearing his statistician’s cap, perhaps he will also point out that Daniel Sedin’s shooting percentage, a stat that seldom declines with age but that does tend to regress towards its mean, was his worst since his sophomore season. Considering that Daniel’s goal-scoring accounts for a significant fraction of Sedin points, a regression to the mean would likely lead to an uptick in twin production. If you’re worth your salt as a so-called hockey connoisseur, you’ll at least acknowledge that.

I already went through Chris' arguments and showed how they were all total bullshit. He was just plain wrong about the point trends for the Sedins, and I predicted that this season was going to prove that I was right about the twins' continuing decline:

Sure, Daniel Sedin's shooting percentage will probably go back up, since he had a rough year. Will that be enough to counter being another year older, playing with worthless linemates, playing against superior California competition much more often during the year, AND having a new coach who isn't going to give the twins insane offensive zone starts?

So...the season is just about over now. The Canucks aren't going to make the playoffs. I wonder who was right about the Sedins?

Well we were both wrong about Daniel Sedin's shooting percentage, as it in fact went DOWN from 8.7% last season to 6.8% so far this season.

And what about their overall stats? Did they continue to show a steady decline, as I predicted?

Yes, they fucking did. 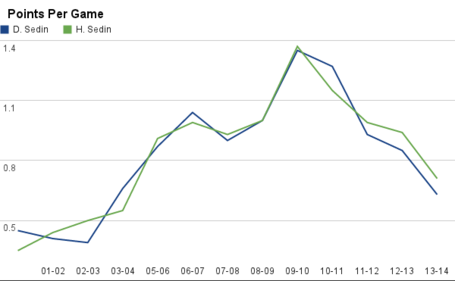 Well would you look at that? Who could have possibly predicted that?

To be totally fair, Chris made one other point back in October that I want to make sure not to miss...

[...] the Sharks fanbase is even more full of oversensitive losers after the "dismal" playoff history their team’s experienced, and the dismal realization that for every young Logan Couture, there’s an old horse with one foot in the glue factory (see Thornton, Marleau, Havlat, Boyle, Stuart…)

It's not really fair, though. It's only natural that Thornton and Marleau have seen their point production increase, what with all the extra games they've gotten to play against those shitty losers the Canucks.

Chris was right about Stuart though. That guy sucks.

Prediction: The Sharks beat the Predators but, much more importantly, the Canucks lose miserably to the Kings.

Video Gamery: My 4th-favorite video game is Portal 1 and 2.