The Kings have now played a total of 96 hockey games this year and are guaranteed to play at least four more to reach one hundred. And these last fourteen have left me spent. I barely watched the Canadiens and Rangers game because after what the Kings have just gone through, what the hell is the point of watching these lesser teams? And now we get Chicago. Oh joy. What's so special about them? I've already gone over everything about them and their lakes, so what else is there to talk about? The Cubs? We get to watch the complete obliteration of hope and joy when Jer tries dip, so talking about them would just be redundant.

So what's left to say? They won a Cup last year! The Kings won a Cup the year before! Whoever wins this series will probably win another because, being entirely blunt, the eastern conference is a joke. Shocking, I know. There really isn't anything new to talk about with this series, so yeah. That's it. You know why?

Because the Kings have already won the only thing that matters. The Championship of California. The Stanley Cup? Tainted. It's been to Florida and Canada before! Plus the Kings already won it, as mentioned. Been there, done that. Why would you want that when you could have the California State Belt? Besides, we all know California is the best. Even when it's on fire. Literally burning to the ground. Those fires eventually are put out. On the other hand, that shitty lake you live next to isn't going anywhere.

No where else is as competitive. New York? It's so difficult beating the Islanders, Sabres, and Devils (because are we seriously considering New Jersey as a real state still?). How did the Rangers ever make the playoffs? Canada? Hahahaha, get the fuck outta here with that shit. No, the Kings took down their state rivals, and in glorious fashion. Giving the Sharks false hope before the ultimate embarrassment occurred, and toying with Anaheim half-assedly before burying them. Chicago did what? Beat St. Louis after losing the first two? Yeah, real original. Beat the Wild? You mean the worse version of Anaheim? Congrats. This series is an after thought. The important stuff is already done.

So a big thanks to Gary Bettman for finally giving the people what they wanted and deserved. A real championship. And thanks to the Chicago Blackhawks for coming on out for this exhibition. You guys are good sports and...uh...are not St. Louis. Yeah! Way to go! However in the meantime I got this to enjoy. 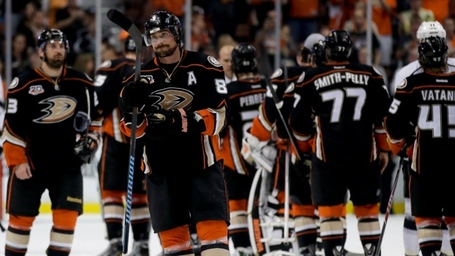 Whew, I just made a mess in my pants again.

Prediction: Did it sound like I honestly give a shit? Everything else is icing at this point.