How to make a story out of nothing.

We have hit the point in the year where the storylines in a playoff series become mandatory for journalist to talk about. At this point, they start to take over as much the games themselves. Not that the storylines can be particularly engaging, or even an accurate representation of what is actually occurring in a series. Out east it's the Rangers owning the "evil" team label since Chris Kreider apparently crucified Carey Price. It doesn't help that Kreider has adopted facial hair similar to that of noted shit-stain, Daniel Carcillo. Of course half the team in New York is rocking the partial goatee currently, so they all sort of look like the bad guys from Tombstone anways. Meanwhile, poor little Montreal and all of Canada haven't won diddly shits in over two decades.

But what about with the Blackhawks and the Kings? Both teams have recent Cup titles, have Slovakian scorers named Marian, Selke candidate franchise players, and outstanding depth. They also have American Olympians that are pretty unlikeable outside of their own fanbases with Dustin Brown and Patrick Kane. But is there a "good" team or "bad" team here? Let's evaluate this year between the two...

The Kings and Blackhawks finished third in their divisions despite outstanding possession statistics. Upstart teams with bad fancy stats won the divisions, while a Cup-less franchise who felt this was their year finished second.

THE FIRST ROUND (OR COLLAPSE-O-RAMA)

The Blues made a ton of moves to acquire the personnel they felt would get them to the finals and finally a Cup after decades of never winning one (hahaha losers). The Sharks meanwhile had their best roster in their history arguably. The possibility of getting to the finals was a very real, very attainable goal. Both teams jumped out to early leads. Then they never won again. The Sharks looked more dominant to start, but also crumbled harder. It was hilarious.

Minnesota plays a rather boring style of hockey. The Wild also aren't very good. Anaheim seemingly got worse, trading away Bobby Ryan for Jakob Sliverfberg, and looked the same as the team that missed the playoffs by a mile a few seasons ago. Except both made the second round, and the Ducks even finished atop the division. Both were rightfully dispatched, though the Kings kind of dicked around before humiliating Anaheim in their own arena in Teemu Selanne's last game. Chicago put away the Wild in Minnesota in overtime for a heartbreaking end.

As you can see, both these teams are very similar and really there has been no way differentiate them so far. At least in terms of how they got to the conference finals. So we move on to the personnel on each team. Let's start with the captains. The assistant captains in Chicago are Patrick Sharp, who leads his team with his charm and good looks, and Duncan Keith, who is a Norris winner and an enemy of teeth everywhere. The Kings have Anze Kopitar who is the best guy on the team, and is breaking ground for raccoons everywhere. Then there is Mike Richards and Matt Greene. Richards used to be productive, but still plays defense pretty well, whereas Greene is just big and hits people. Patrick Sharp alone gives the Hawks the edge in public approval because all he has to do is look and smile at the camera.

As for the captain themselves, Jonathan Toews has attended the Darryl Sutter school of bizarre as fuck face making then glued on Lincoln chops. Dustin Brown looks like he was attacked by bees and his face never recovered. He also has no etiquette for media appearances. 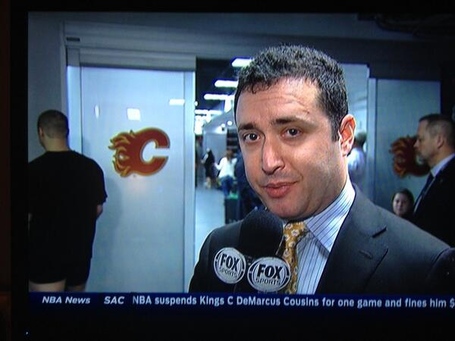 Put some pants on if you feel like going out, Dustin. That's slob behavior and the media won't accept that lack of professionalism.

As for the rest of the team, the Kings are notorious troublemakers. Their antics are vile and disgusting, and if they weren't my team, I'd probably hate them. Manners apparently don't matter to us here in L.A. 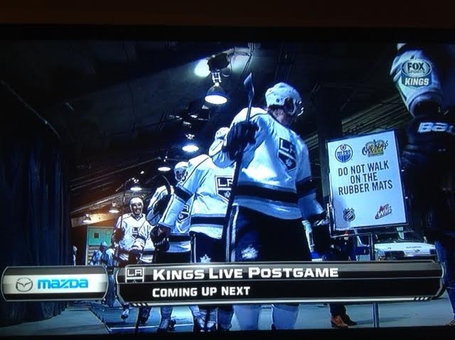 There's rubber mats only in one strip of the room and the Kings walk directly on them. In a single file line! Sutter really has no control over this team, which brings us to our last category: Coaches. Darryl Sutter appears to be suffering minor strokes throughout games. It's been enough to inspire a version of 2048 featuring Darryl, and occasionally he even transforms into a dog. But everyone loves dogs. Joel Quenneville...well, he's a bit more colorful with his gestures.

Unfortunately for the Kings, Darryl Sutter mumbles incoherently to reporters and broadcasters, so everyone apparently winds up tolerating a good ol' grape squeeze instead.

It looks like the Kings will have to be the foil to the media darling's Blackhawks. Which is fine, because they have been the foil every round so far. The Sharks supposedly were "due" and had to get redemption over their rivals. The Ducks were the little team going up against their big, bad older brothers while also trying to give Selanne one more big send off. Except the Kings whipped them both in embarrassing conclusions.

Anyways, it was bound to happen just because the Kings wear black jerseys and Brian Engblom hates them.

Prediction: The Blackhawks win and NBC builds a shrine in their honor as Darryl Sutter's face turns into a black hole.