Anaheim Ducks Playoffs: Let's Get This Going, I Guess.

Share All sharing options for: Anaheim Ducks Playoffs: Let's Get This Going, I Guess.

It was a lot of hard work offending so many slow-to-the-punch Stars fans last series, and I've already started rustling some jimmies before this Ducks/Kings series even started, so I'm going to pump the breaks for just a moment in this lazy, unread weekend post to reflect back on the regular season series that the Ducks and Kings had here on Battle of California.

Bust first, I started off the Stars series with a fresh, clean-shaven face, ready to let a brand new playoff beard take root. Let's check in on that new beard and see how things are going... 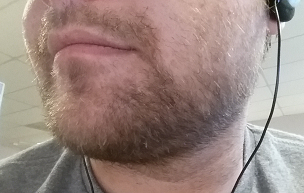 Slow, but steady progress. It led Anaheim in to round two, at the very least. Onward!

The Ducks dominated the Kings all season long, finishing with a 4-0-1 record against them:

... Did I say "dominated?" Oh, I meant just barely skated away with victories in very, very close match-ups. With the exception of the Ducks' hilarious 3-0 shutout of the Kings that embarrassed them at Dodgers Stadium for the Stadium Series, all games were decided by one goal, with two of the games ending in a shootout. That 4-0-1 record is not as intimidating at first glance.

And given the momentum that the Kings have coming off a comeback from a 0-3 game series deficit, the Kings look pretty intimidating themselves.

Now, before Dunn and I start getting vicious and all the Ducks/Kings fans who are not BoC-regulars show up, not understanding what exactly this place is all about, and start shitting all over the furniture and making asses out of themselves, just remember that Dunn and I love each other very much and no matter what happens, we will still love you too, gentle reader, and none of this is your fault.