A couple of the few LA Kings fans who are actually literate are asked to write something for Puck Daddy, hilarity ensues. Kings @ Ducks, Game Two.

Here's "Surly Jacob" trying really hard to look like Andrew WK. Not sure how much more evidence you need of how big a tool he is.

When people complain about Puck Daddy's annual guest-written "eulogies" that roast teams as they are eliminated from the playoffs, it's usually because they are overly sensitive to the fact that their favorite team is being lambasted and are in too much of a huff to see the humor behind it (see, for example, the touchy reaction of Philadelphia's fanbase to Battle of California alumnus Rudy Kelly's Flyers Eulogy).

Occasionally a Puck Daddy Eulogy will be a little dull or rely on too obvious of a joke, but they're generally entertaining enough. But on Saturday, something beautiful happened when Puck Daddy posted a Sharks eulogy written by the completely forgettable Kings superfan site "Surly & Scribe." I'm leaving out a link to their blog because there is nothing worth seeing over there.

The writing was so terrible and so unfunny that it was universally labeled as the worst thing ever published on a hockey site, even by people who have read Battle of California. It wasn't just a sore-loser fanbase crying foul, but the entire hockey world. It was so bad that, for the first time ever, Puck Daddy editor Greg Wyshynski actually had to essentially apologize for one of the site's Eulogies:

Eulogies are as they've been for years: Some hit, some miss. Some wit's sharp, some of it is thuddingly dull. We do our best to pick writers

It was poorly structured (near the point of unreadable), relied on jokes that only appeal to 13 year olds ("hahaha Tomas Hertl has a vagina because he's a girl what a stupid girl hahaha"), and ignorant of the subject matter that they were attempting to write about.

This Idiot Wears A Cowboy Hat 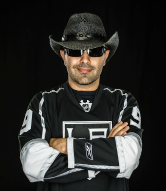 This is a real picture of "Bobby Scribe." This isn't a mock-up of what I think this idiot would look like, this is really him. He really is this awful.

In other words, Surly & Scribe are completely representative of the larger LA Kings fanbase, and now that the greater hockey world is more and more so being exposed to that fanbase, they are shocked and horrified to learn just what absolute garbage the idiots who root for Kings hockey are.

It was nice of Surly & Scribe to go out and prove the point, exemplifying the exact brand of uncreative and uninformed demeanor that those of us who are familiar with Kings fans have been warning others about for decades. Had I not been exposed to Surly & Scribe in the past and had already been aware of just how terrible (but authentic) they are, I would have assumed that this Sharks eulogy was some sort of brilliant reverse-roast for the purpose of satirizing the Kings' followers, exposing what absolute bags of shit each of their fans are.

But alas, we aren't so lucky. The piece wasn't satire; these are true-life Kings fans, and they really are this awful. Welcome to Los Angeles hockey, a wretched shithole.

The Ducks will continue to lose forever because fuck this world.