Swimming with the Sharks, Episode I

Joe Thornton will stay in San Jose as long as you jerks want him to. Don't be a idiot, keep Jumbo in San Jose! Now that I've gotten that out of the way, lets start having some fun this offseason....sexy fun!

Share All sharing options for: Swimming with the Sharks, Episode I

The offseason has been a cruel mistress to us Sharks fans. Not only do we have to endure trade rumors every other minute, we have to deal with the idiotic words of the media on a frequent basis and still somehow begin to heal from the most crippling playoff defeat in Sharks history. There is a silver lining woes though -- this loss in the playoffs, a 3-0 collapse to our biggest rivals, is rock bottom! There is no playoff elimination worse than blowing a 3-0 lead! We are here so lets accept it. If someday, we experience this again (hahaha holy shit we totally will), we will be ready! 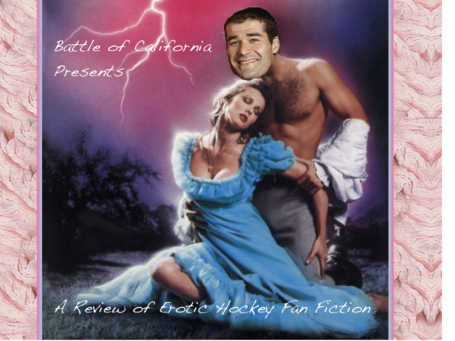 Long story short (too late): I found a website where sad, lonely people go to write dirty stories about making sweet love to their favorite hockey players. It's pretty great. There's a lot of stories about the typical heartthrobs like Jeff Carter and Patrick Sharp. Of course, there are stories about players you would never want to imagine without a jersey on, let alone them having intercourse, such as Daniel Carcillo and California Chrome himself, Logan Couture. The stories can be as short as one chapter and as long as fifty(!!!!) chapters.

I read a story entitled "Swimming with the Sharks" written by mgflutie. It is rated NC-17 and I am assuming that it is because the story is focused around Logan Couture, so it is not for the young nor faint at heart. The story is about a young woman named Eloise (terrible name), who is a barista and also apparently writes novels in her spare time. She has been living with a woman named Molly for the past six months, and Molly, of course, is a ditzy whore, because isn't that always the sidekick of a nerdy barista novelist? Anyway, Molly invited Eloise to go to a charity event hosted by the San Jose Sharks, and Eloise is like "lol omg I don't know about hockey, but I'll go after I read my stupid Greek Mythology book."

Molly and Eloise go to the Charity Event. They begin meeting different hockey players and Eloise is instantly star struck by these hockey players she never knew about until she met them. Eloise was looking at the auction table when Logan galloped behind her.

"No drink? Let me get you one."
Eloise turned to discover a cute guy offering her a flask of champagne. "Thank you so much," she smiled and took a small sip. No need to go overboard in case she got a call. "So..." she smiled awkwardly, strongly guessing this guy was a hockey player. She swore she saw his picture on one of the signed pictures.
"I'm Logan. Logan Couture," he smiled and shook her hand. "You not gasping tells me you got dragged along."
Embarrassed, Eloise stammered, "Well. I may not follow you religiously but I'm glad if I hear you guys get a win. Sorry, I get busy with work stuff."
"Work stuff, eh?" Logan smiled. "What do you do? Let me guess. Interior design? You handle entertainment celebrities? A model?"
"Not even," she laughed. "I have a degree in European history but for now I work at a coffee shop."
Logan smiled. "Admirable."

Hahahaha fuck guys, I didn't know that Cooch was so smooth. Anyway, after that meet-cute, Eloise met a bunch of people like Dan Boyle (RIP), Tomas Hertl, and Bracken Kearns (lol). She's also apparently in love with her publicist but nobody cares. Eloise ended up going home alone because her roommate disappeared and she didn't bother looking to see where she went because she just figured she was off being a miserable slut.

The next day, Eloise gets a knock on her door and it is Amber Boyle! Amber Boyle is Dan Boyle's wife, and boy is she pissed, guys. That stupid skank Molly banged Dan! Eloise went to confront Molly and Molly was no where to be found. It appears that Molly...never...came...home. OH MY GOODNESS I WONDER WHAT KIND OF DANGER SHE IS IN! Actually, I don't wonder at all, because this story is very terrible.