Seriously, does anyone know anything about this fucking guy?

Wherever the Stanley Cup goes, so does that awkward looking dude with the funky hair. All of you probably know who I am talking about. The Keeper of the Cup. This guy: 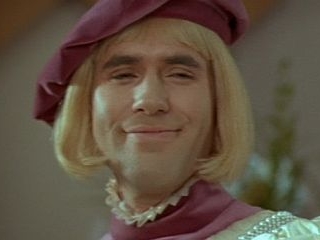 This man is known as Phil Pritchard. He is Canadian (stunner) and has a socially frowned upon fetish of being sexually attracted towards large silver chalices. Thankfully for him, the NHL has a big shiny Cup that needs constant protection. Pritchard, who was also out of work after failing to land a gig as a Michael Jackson impersonator despite his replica white gloves, signed up to work at the Hockey Hall of Fame in Toronto. What followed was akin to the plot of The Bodyguard.

Phil started simply making sure no one touched the Cup while stored in Toronto, and quickly found himself drawn to it. He volunteered to go on trips with the Cup, accompanied by the Cup's then-husband Scottie Morrison. His never ending vigilance around the Cup attracted attention and he was quickly assigned to "keeper's assistant", a position he quickly surpassed with his marriage to the Cup in 1988.

And he has never left it's side since. Sure, everyone hears about the Cup around the Finals and then there's Pritchard in tow with it. He keeps an eye on it when those rowdy hockey players get to spend a day with it, though he has to keep his jealousy in check. Standing off to the side, hands clasped behind his back, Phil takes it all in. The other guys grabbing at it. Kissing it. Caressing it. Sleeping with it. It's a lot to bear, but Pritchard toughs it out and makes sure nothing dangerous happens to the Cup.

But during the season, when the Cup isn't being manhandled, what does it with its lack of attention. It's the Pritch of course! He takes it out for dinner, plays video games with it, and whispers sweet nothings to it late at night. It's their personal time. So while the Stanley Cup seems like a rotten little skank, being passed around from one guy to another, Phil Pritchard is there. His love enduring. And he puts on Whitney Houston's "I Will Always Love You" and he embraces the big silver trophy when he can have it all to himself again in Toronto.

Game four was actually how I figured the series would go; the Kings control play and shoot a ton, Lundqvist keeps the Rangers in it, and it's a low scoring affair. If the Kings play that well again, well, Lundqvist is going to need to be superhuman again a couple more times. It was at least nice to get Rangers fans to quit whining about how unlucky they have been.

Prediction: Phil Pritchard has to deal with guys passing around the Cup and kissing it in front of him tonight.