In an effort to get you guys used to having a new Battle of California Overlord, Meg is risen from the dead and taken it upon himself to ask me some questions.

Meg: Who the hell do you think you are?

Stace: Whatever the reader wants me to be, obviously. Assuming that all 16 people who actually read Battle of California are basement dwellers, they can fantasize about my feminity in whichever way they want. I am a blogger for the people, by the people. I've been a Sharks fan for awhile now. I can remember the days where they were not the most embarrassing hockey team in California; oh how I long for those days. I started following the Sharks because one of my best friends is a Kings fan and was super annoying about it. He was the only one of us who followed hockey and frequently was forcing the Los Angeles Kings down our throats. Everyone around me soon developed Kings fandom, which I found annoying, but at least it wasn't the Ducks. After pestering me for months to be a Kings fan, I thought it would be funny to secretly study the Sharks, learn all about them, and pretend to be a Sharks fan. Jokes on me, I actually really started to like the team and found it so fun to follow them. Obviously, I started to follow them during the regular season so I had no idea what I had in store for me come April. It was the biggest mistake I've ever made in my life. Like most of my fellow Sharks fans, I am suffering from Stockholm Syndrome, and I cannot abandon this team no matter how many times they rip my heart out of my ass. Not only is everyone in my life a Kings fan, but I live in Orange County, so I have to deal with Ducks fans when I come across one every four months or so. When I'm not thinking, talking or writing about hockey, I'm probably bragging about my Masters Degree or trying to convince people to watch Veronica Mars, or more recently, Hannibal. I'm the worst.

Meg: Why did you agree to write for BoC? Are you insane?

Stace: It was basically like you see in the movies when some hot shot from a corporate firm takes you out to a nice dinner and attempts to show you the good life in order for you to work for them.... except imagine an extremely low socioeconomic version of that. Like if someone wanted to woo me into cleaning port-o-potties. I met one of the Battle of California associates at a local watering hole and we discussed a possible signing over a pitcher of beer, which I ended up paying for. He told me all about how it is terrible having to write 82+ posts a year, and the burnout that sinks in usually about two months into the season, so I de-WAIT why I am doing this? That sounds terrible. Which leads me to the second part of this question, yes, of course I'm insane.

Meg: What is your most painful hockey memory?

Stace: Oh wow, I've going to have to dig far back into my memory bank for this one.... instead of talking about the obvious, I'll just write about the live hockey events that I have gone to that have been fucking awful.

1) May 22, 2011: Western Conference Finals game four. The Sharks penalty kill was 29th in the league that year and after a slew of idiotic penalties, including a couple delay of game penalties, the Sharks gave up three two-man advantages to the Canucks IN A ROW, who had the number one power play that year.  Fucking brutal. I wasted at least 350 dollars on a flight and ticket to see that bullshit.

I could only watch about 1:15 of highlights before going into a Chocobot-like seizure.

2) June 14, 2012: Going to the Kings' cup parade and championship rally. So goddamn painful. It was really cool to see but Christ, not being able to experience that for your favorite team fucking sucks. I cried, a lot, but beer was half off at Staples so the day wasn't a complete failure. Wait, yes it was because some jerk stole my wallet at LA Live. I hate Los Angeles.

3) May 28, 2013: Western Conference Semifinals game seven. Streamers. Pavelski vs. open net. Justin Williams. Fuck it all. I was wasted and cried, several times. The Sharks were a goal away from playing their first ever hockey game in June. Fuck you Los Angeles. 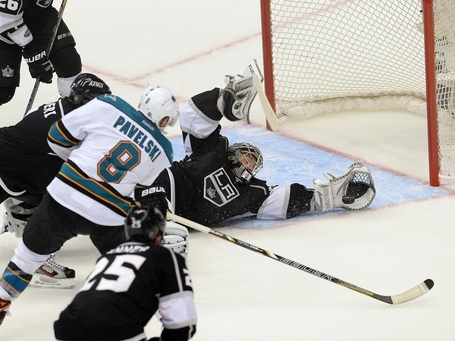 Elevate the puck you stupid fuck via cdn.fansided.com

I used to spend a lot of money on hockey games but I don't anymore because the Sharks never win when I go to games and also, I'm poor. It is something I have come to terms with and if me staying home will help them win a cup in the next 30 or 40 years than I guess that's what I will do. For now I just drink at home and yell at my television; I am my father's daughter, after all.

Meg: Who do you like better: Dunn or Jer?

Stace: I'm going to look at this question as "who do you hate less?" and it is really hard. I've been thinking about this for probably four hours. I was going to flip a coin but I don't have any money on me currently. I was going to flip a bitcoin but there is physically no way for me to do this. I decided to play pick-a-hand and the winner of pick-a-hand is Dunn. I hate Dunn less. Please do not discredit how much I hate both of these individuals. They both make me cringe frequently.

Thanks to Meg for taking the time out of his busy schedule, which consists of drinking canned dasani and playing Mario Kart 8, to ask me these questions. You are gone but not forgotten.